We've been busy down in the basement the past two weeks sorting through our library to do a massive downsize. We originally had a set of eight bookcases and we've managed to get it down to two bookcases of books we're keeping and one bookcase of books we're actively selling. We've already donated about eight boxes of books to the library and have more boxes packed to go. And we've been having a massive liquidation sale in our SCA facebook groups to reduce the remaining books that don't have much financial value.

Excuse the pictures, it's still a disaster down in the basement family room, but I am quite pleased with our progress so far.
Here is where we're at now. 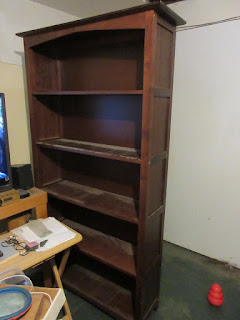 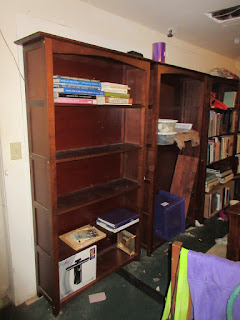 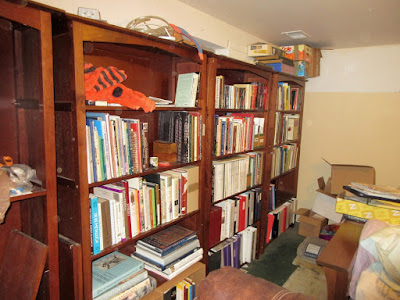 The two far-right cases are books we're keeping for now and the third one is books that are listed for sale. We've already got a friend lined up to come pick up these empty bookcases later this month.

We had also been contemplating building a new shelf unit to hold the DVDs. The shelves on these cases are just too far apart and there was a lot of wasted space. Then Jeff had the brilliant idea to look inside the cabinet that had been blocked behind the bookshelf and found this. 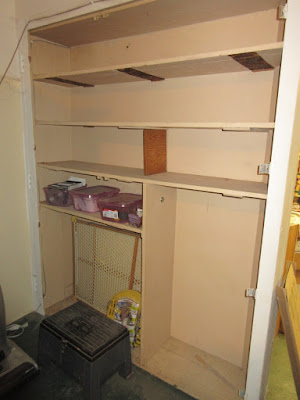 With some modification and some painting, this should work to hold our DVDs. We'll take it. 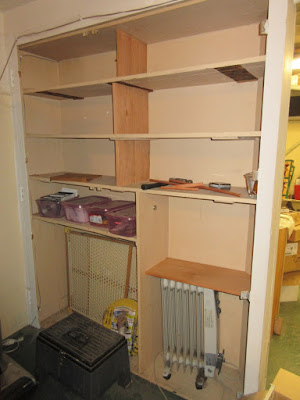 Jeff started adding in some supports because the shelves are so long they'd likely sag with the weight. He's planning to add a few more shelves before we paint it.

It's not the most elegant solution, but it is inexpensive as we'll likely use materials we have kicking around our garage to finish it.

Right now the doors are huge and they bind up on the floor so Jeff will have to spend some time modifying them so we can more easily open and close them. Stay tuned. It will probably be a month or two before we get through this project because we're distracted with lots of other things right now.

Posted by Sharon Kwilter at 8:06 PM