It has been really hot in Portland this summer. We basically skipped spring this year. I don't function well when it's really hot, so I've been crashing in the basement on the futon and I often get sucked into binging on TV. This week I have finally managed to start sifting financial records. I realized we've got records that date back to the early 1990s, and there is no reason to keep most of them anymore, so I've started shredding them.

We have an inexpensive shredder so it's not quite up to the volume I need to process; it keeps overheating. I can usually shred for about 20 minutes before it needs to take a long break. This is five day's effort. 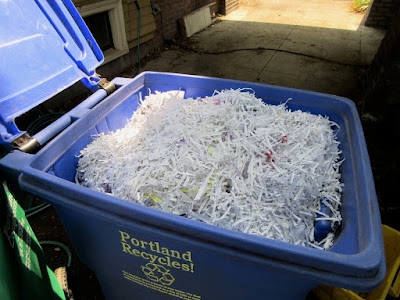 I probably have a couple more weeks of shredding to do at my current pace.

And I have a bunch of photo scanning to do too. I have at least three boxes of old family photos I had planned to scan right away when we moved here and then return to other family members. It's been eight years and I still haven't done it. It's time. Even though we're hemorrhaging money right now, I went ahead and ordered a new photo scanner so I can get this project finished too. These boxes are not moving to the new house.

The new house closes on Aug 20. I suspect we'll pick up our pace of sifting once we start moving stuff over.

Posted by Sharon Kwilter at 2:37 PM