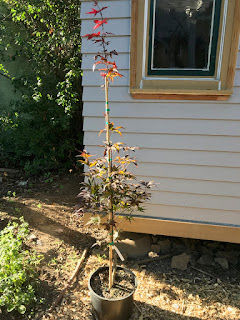 In my never-ending quest for color palette perfection, I dragged Jeff to a couple of nurseries somewhat outside of Portland this weekend.

Loen Nursery was having an end-of-season sale so we went on Saturday to get our Japanese maple. My plan called for an Acer palmatum 'Sherwood Flame' because all my research told me it maxed out at 15' and was burgundy in the summer and red in the fall. But, the 'Sherwood Flame' Loen had in stock was neither burgundy nor red. It was green, which would not do. So, right then, I ditched the plan and instead bought an Acer palmatum 'Wolfe', called Emperor I. Its mature height is a little taller than the Sherwood Flame, but it is at least burgundy/red.

We also picked out several perennials, which were 50% off. And we bought a tray of plants for groundcover.

On Sunday, we drove out to Blooming Junction in Cornelius because they have an online inventory and it looked like they carried a few plants I'd been looking for for a while. They, unfortunately, were not having a sale, but we did get a couple of plants I'd had trouble locating. And, of course, we brought home a few spontaneous purchases. It's hard to pass up beautiful blooming plants.


So, now we've got most of the plants for the Hidden Garden here, lined up and ready to go in the ground when we're ready. I'll probably re-pot most of the 4" pots into gallon pots to survive the August heat. The rest of the plants not yet purchased are just not available right now, so I'll have to wait. (I hate waiting.) 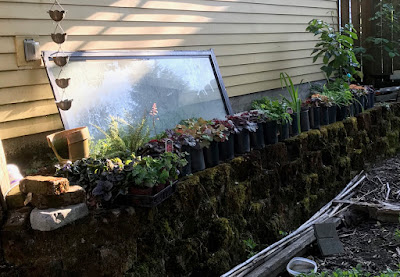 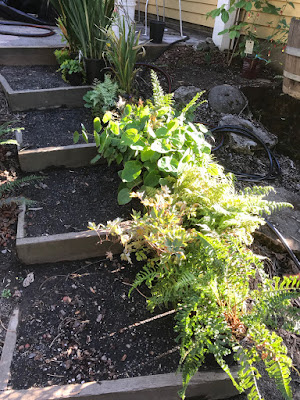 We are getting quite the fern collection. It seems like every time we see a fern we don't already have in our yard, we pick up at least one. 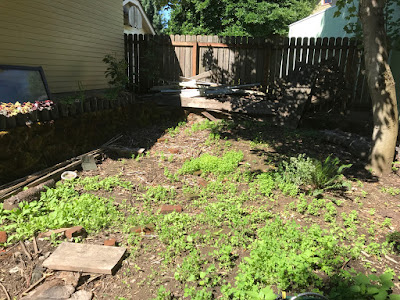 Last month, Jeff spread some leftover crimson clover seeds and has been watering the area. I think he is trying to bring up the mint and blackberry so he can remove them, and to amend the soil by turning under the clover in a few weeks when they're ready to dig in soil amendments.

I finally got primer for my vintage patio set, so I plan to start working on that tomorrow.