Somehow I managed to maneuver myself into a whole bunch of painting projects this summer. We have the obvious shed project. I'm embarrassed we still have not finished painting it; we finished building it in 2017. The siding is primed, but the door desperately needs to be painted before the rainy season. I'm hoping we'll finish painting it before Fall.
Jeff was cleaning up the back patio because there were some pavers along the edge which had sunk down at least half an inch and were below the level of the wood edging, creating a trip hazard. He wanted to fix those. As he was looking at the state of the patio, there was quite a lot of vegetation growing between pavers, which he didn't like. So, he decided to pressure wash out the sand, readjust the sunken pavers, then re-sand it all.

I also decided I wanted to fix up my grandparent's old redwood patio table. This set is probably 50 years old. They lovingly cared for it and put it in the garage each winter. Sadly, we put it outside year round and didn't even bother to cover it during the winter. I was ashamed of how it looked when my father came to visit last month. 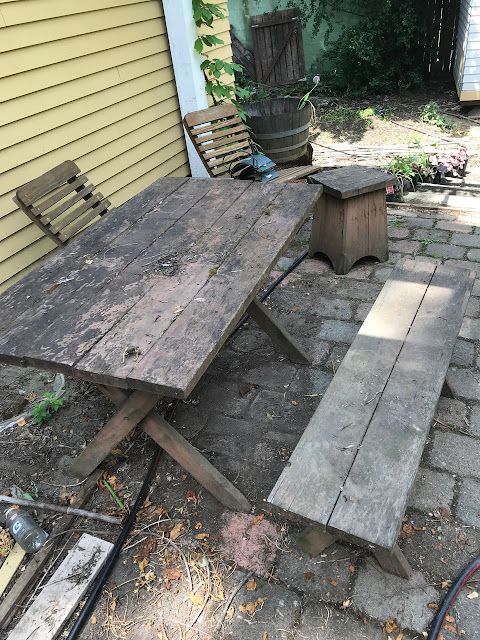 I have since cleaned it and it looks much better. But while I was cleaning, I realized it was just nailed together, so I pulled off the tabletop boards and I've sanded all four sides. Despite the appearance, the wood is still in good condition. I'm planning to pressure wash the legs and benches, then I'll stain all the boards with a rust-colored opaque stain. Then we'll reassemble with deck screws. However, once it's finished, I am not going to put it back out on the patio. We're going to store it at the house in Prineville and use it on the covered back porch.

For Portland, I decided I wanted chairs for the patio. We've been eating outside most mornings, and it would be nice to have comfortable seating outside. Last Saturday, we bought this set off craigslist. 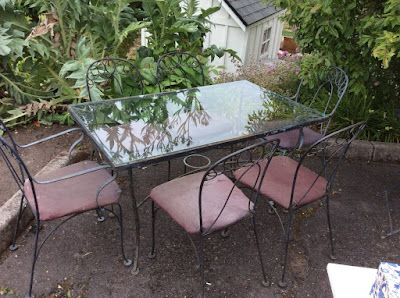 I got it home and started prepping it to repaint, then this set became available. 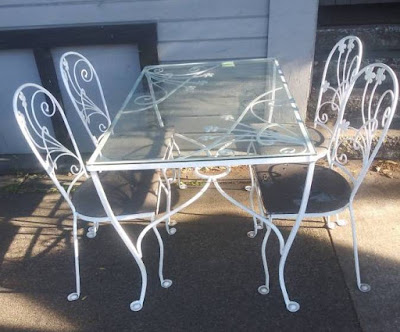 I thought it was pretty, and decided I liked it more than the other set I had purchased. So, now I need to prep and paint both sets and resell the top one.

Finally, as we were buying the white set, the guy mentioned he was having a garage sale and I noticed some green wicker chairs in a stack. I asked if those were for sale, and he said yes and named a really low price. So, we brought them home too. They are not in awesome condition, but we really needed additional seating on our porch. We had to bring out dining room chairs when my father visited. Obviously, they need to be cleaned and painted too. (Our pressure washer is going to get lots of use this summer.) 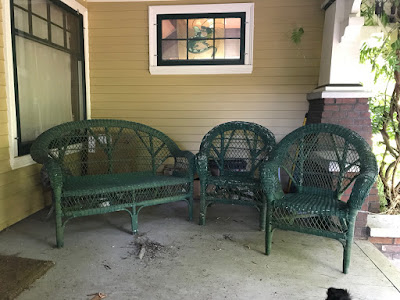 Posted by Sharon Kwilter at 9:30 PM