We started off our morning with a quick trip up to South San Francisco to buy a lightly-used doghouse for Shasta. It looks like this: 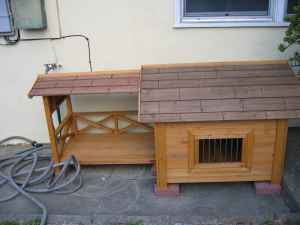 Then we dropped in at Sears so Jeff could take a look at the appliances I was thinking about. We've decided to buy a refrigerator with a bottom freezer; they just seem to make so much more sense. You reach into the refrigerator much more often than the freezer so why stoop every time? Unfortunately we only have a 30" wide space for the fridge in the kitchen, so we're going to have a pretty small unit, at least compared to what we're used to. We will, at least, have a freezer as well, out in the garage.

They didn't have the washer and dryer I'm considering, so we'll just have to order that one on faith if we're set on getting the top-rated unit from Consumers Reports.

After Sears, we dropped the dog off at Upton then went and had a quick lunch. When we got back to Upton, we cleaned up the construction debris in the master bedroom. We pulled up the carpet pad and swept up the rest of the drywall chunks and nails and got them in the garbage. The room is pretty much cleaned out and ready to go.

We got a call from our drywall guy and he cannot start until Wednesday. It's disappointing, but at least he called instead of just not showing up. Now I'm going to have to be there every day next week; that's a drag. Well, at least we won't have to worry about being in the way of the furnace guys.

I'm going to try and get internet installed in Redwood City ASAP. If I'm going to be spending so much time over there, it would be nice to have something to do when I'm not working on cleaning and painting.
Posted by Sharon Kwilter at 5:09 PM