We had an incredibly busy weekend this past weekend. We got a lot done on the Redwood City house, we went to the San Mateo Gem Show, plus we went to one family gathering. (We probably should have gone to two, but we had already double-booked Sunday.)
I had planned to go to Southern Shores' Newcomers Event on Saturday morning, but we were squeezing it in before an Easter gathering in the afternoon at my Dad's place. But Jeff managed to sleep in until almost 11AM, so by the time we all got up, ate and showered it was nearly 1PM, so we didn't make it to the event. Oh well.
At a bit before 2PM, we headed over to my Dad's place. I thought the plan was to eat dinner then all of us would head out to the Redwood City house and my brothers were supposed to poke through the stuff remaining in the house and pick the things they wanted. Well, no one really shared that plan with them. So, my brother Jeffrey showed up late and they said they weren't available to go after dinner because one of their twins had a baseball game. And by the time we were done with dinner, visited for a while and the kids had done an easter egg hunt, it was already 7PM and then James' declared that it was too late for him to head over to the house. He had to leave on vacation very early morning the next morning and then didn't have time to go over to Redwood City. Oh well.
Anyway, I actually had tasks scheduled at the Redwood City house on Saturday (when all three brothers would be there) and none of them got done. So, on Sunday, we needed to try and catch up everything we had missed.
Bright and early on Sunday morning, because we were expecting to leave Shasta at home by herself, we tried to go out to visit a park for a long walk. We drove to Rancho San Antonio County Park to go for a walk through a lovely grassland area. But when we got there they had signs posted that no dogs were allowed. I find it very odd their website and online map is totally silent on the subject of dogs and you only find out when you get there that they aren't allowed. We were pretty disappointed and instead headed to a regular neighborhood park and walked a few circuits around the park to try and wear Shasta out so she would mostly sleep while we were gone.
On Sunday morning, we were invited to my Mom's family gathering at a restaurant, Olive Garden, at 11AM. But I had also been invited and already accepted an invitation to a gem show in San Mateo at exactly the same time. Maybe I should have cancelled the visit to the gem show, but I've been wanting to go for a couple years now and there were always conflicts when it came up in the past. We really enjoy poking around at the gem show to pick out fun charms for Jeff; we hang them on ear wires for Jeff. He really enjoys having the right earring for the right occasion; he's been known to change his earring more than once per day. He has so many more earrings than me that I chuckle. I even need to buy my own little earring rack because he has almost squeezed my earrings out. =) Here is yesterday's haul: 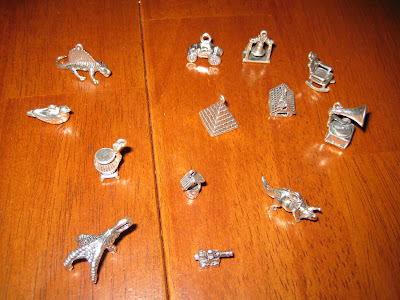 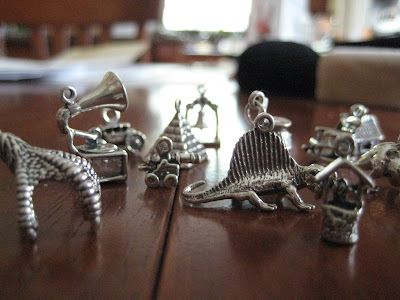 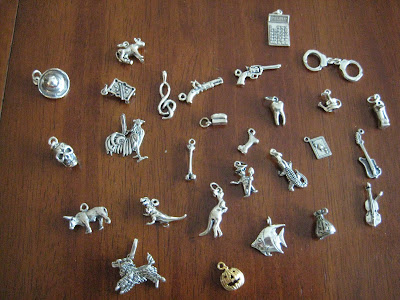 This is probably his favorite. It's a calculator with the first few digits of pi on the display: 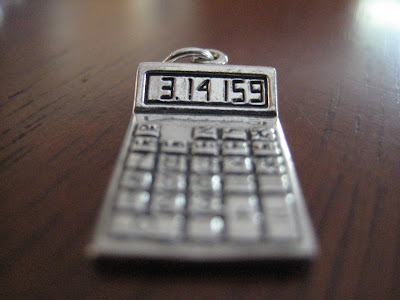 After the gem show we tried to stop at In 'n Out Burger, but they turned out to be closed for Easter. So, we went to Clarke's Burger in Mountain View and had a quick lunch. Then we grabbed the truck and the dog and headed back up to Redwood City. We were there until about 7PM.

While we were there, not only did we (well mostly Jeff) manage to do all the tasks on the Saturday list, but also everything we had on Sunday list as well. We vacuumed the master bedroom carpet, took pictures (to try and find a new home for it on Craigslist), and removed it and got it out of the house. We unloaded a third bookcase from the truck into the front bedroom and I filled it with several more boxes of books for sale at the estate sale. We cut up the carpet from the middle bedroom and taped it into small rolls that could easily be loaded and thrown in the dumpster. We also folded up and bagged the old, shedding pad from that bedroom. Jeff also managed to remove all of the trim in the master bedroom, to prepare for removal of the drywall later in the week or next weekend. And Jeff helped my father run the wiring for the air conditioning unit being installed later in the month. And we got the trash all thrown out later that evening.
By the time we had grabbed a little dinner at nearly 9PM, we pretty much just came back here and crashed into bed. We were exhausted. But I do have hope that we'll get all this cleanup and painting done in time.
Posted by Sharon Kwilter at 9:39 AM