Moving to Redwood City in May

Well, our plan to move to Redwood City was sort of tentative until we found out whether the house could be affordably retrofitted with air conditioning (at this point I am really too wimpy to live in California without it). We had an estimate yesterday and it looks like my father is going to spring for the new furnace and air conditioning as long as Jeff and I commit to stay for a year. The deal is just too good for us to not. So, it looks like we're moving for sure. 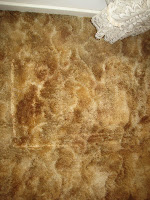 As far as cleaning up my grandmother's house, we are nearly done. All three of the bedrooms have been cleared out. We have one more bedroom where we plan to pull up the carpet to expose the hardwood floor this weekend. The master bedroom doesn't have a hardwood floor, as it was added later on. The carpet in that room is dated, but still in good condition. So, I guess I need to decide if I want to pay for a carpet just so I can have a different color. It's currently a mottled brown shag shown in the picture.

We've got the common area all loaded up with tables mounded up with stuff for the estate sale, so it will be a while before we can get those floors finished.


We're going to pull up the old carpet in the living room and my father is going to replace the vinyl in the kitchen. And we're going to paint the entire house that isn't wood-panelled and then we should be able to move in. Since the estate sale is the third weekend in April, we're thinking we can probably start moving stuff over in earnest in early-May. We should be out of our exorbitantly-priced rental in Cupertino by June.

We're still really enjoying the company of our puppy, Shasta. She is a bundle of energy and we have to keep a constant eye on her. Though, I left her outside yesterday while I went to my grandmother's house for 5 hours and when I came home she was curled up next to the door and there wasn't any obvious monster-child damage in the yard or on the house. So, maybe it will work to leave her in a fenced area; I would much prefer that to leaving her in a dog crate which was going to be the plan.

This morning I signed us all up for a beginning dog obedience class starting April 28. Unfortunately, I am currently enrolled for a class at De Anza on Tuesday nights. Oh well, I'm going to drop the college class and take the puppy class; it's a higher priority. We are keen for Shasta to be well-behaved on the leash and we want to learn how to teach her. We learned there is a dog park in Redwood Shores (near Redwood City), but we won't bring Shasta there until she learns to respond to voice commands.

This is my favorite part of the afternoon. I'm here working on my computer and Shasta is sleeping next to me on the couch. I'm very happy to have a dog child again. I'm trying to put together an order for moving boxes from Uline. It's hard because I'm trying to guess how many boxes we need. We don't actually need as many as we often get since we're moving over a number of weeks, and can reuse boxes from one weekend to the next. Also, I want to use a higher grade of boxes as some of the stuff is going to get put into storage and so the boxes are likely to be stacked for quite a while.
Posted by Sharon Kwilter at 2:15 PM