Well, I am back in school. I have classes three nights a week: Wednesday is Legal Research and Writing, Thursday is Civil Litigation and Trial Preparation and Monday is Torts. I have the same teacher for both Civil Lit & Torts and he's quite a character.

I've also got an adaptive PE class three mornings a week, on Monday, Wednesday and Friday. I went the first time yesterday and it went pretty well. The teacher spends about half-an-hour going through a warm-up routine and then we spend the remaining hour or so working out on the exercise equipment. I'm a bit sore today. 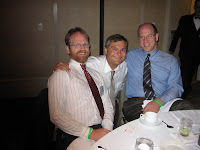 This past weekend our high school, Cupertino High School, held its 25th Reunion for our Class of 1984. Jeff went to the actual reunion, but I did not; none of my non-local high school friends planned to go, so I couldn't see spending $115 to attend. We did both go to the informal class picnic on Sunday.

We haven't decided whether we're going to buy my mother's house in Cupertino. We're still negotiating with her about the details. We need to have a clear understanding about what she expects from us before we'll consider agreeing to the deal. We are going to do dinner with her on Friday night and talk about it further.

We have mused a bit about IF we buy the house, how we would remodel it. The house was built in 1959 and doesn't seem to have any particularly striking style; both the bathrooms and kitchen have been remodeled (in around 1980) and don't retain any mid-century look (if it ever had any). Currently, it's just a bland, fixer rancher house with an attached garage and a big lot.

Since I've been researching the 1920s Bungalows for a couple years now, and it would be easy to slip into this style with its hardwoods and tile. But we may choose something a bit more modern for the interior, because the 2 car attached garage just won't look right on a craftsman. IF we buy this house, we'll have so many decisions ahead of us.

I've been continuing to read, though my pace has slowed down considerably. Since my last list, I have read:
I am still working on the Jane Austen Shorter Works; I read it on and off. I have also today started Birdsong by Sebastian Faulks which seems to be a romance set in the time of World War 1.
Posted by Sharon Kwilter at 12:02 PM