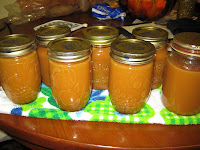 Tonight, after the temperature cooled off, we decided to do some canning. The peach tree in the backyard is pretty full and the peaches are starting to fall on the ground. We managed to do two batches before we got tired of processing fruit and stirring the pot. We still have to do another couple of batches, but not tonight, we're too tired.

Apple has finally discontinued dinners at work, so Jeff should be home for dinner much more often. That will definitely improve the nutritional content of my dinners! Tonight we had a barley dish experiment; it was pretty good.

On another topic, we're pretty disappointed with our friend who was going to buy our Ford Ranger pickup. We had promised to sell our pickup to her when we were planning to travel for a year and when that plan changed we wanted to back out of the deal, but I couldn't make myself do it. We even called her last month to double-check that, yes, she still wanted the truck and was planning to come pick it up in August. So, we went ahead and bought the Toyota. Well, we finally call her yesterday because we haven't heard from her and she says she doesn't want it anymore! Grrr. So, now I guess we need to figure out what to do.

This morning we dropped the Ranger off at the auto shop. It needed its air conditioning recharged and a few other minor items worked on. If we do end up selling it to a stranger, it will likely fetch more dollars if the A/C is in working order. Though, we're actually considering selling our Honda Civic Hybrid instead. Jeff mostly commutes on CalTrain and I'm not commuting either, so the car just sits there. Though, I am concerned about if I get a job that's a bit of a drive... But we really don't need three cars. I guess we'll figure out what to do in a few weeks.