Inspired by his organic gardening class, Jeff decided to try and get a fall planting put in before the rains start in earnest. He has spent many hours this week double digging and adding amendments to this bed. It's still a bit of a mess, because he's not finished, but he's made good progress since last Sunday. 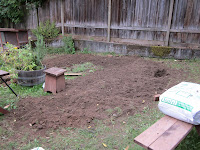 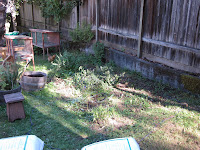 After class today, he dropped in at Naomi's Farm Supply and picked up vetch, crimson clover & rye seeds for a cover crop. I'm sure he'll add more details at his blog, when he has time to write up a post. 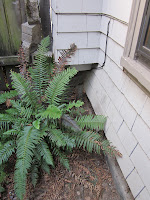 Anya has been quite the layer this week! She finally settled on a spot in the yard to lay her eggs, and it's making collection much easier. Though, today I felt bad about taking them because she was following me around acting very concerned I might disturb her nest. I think she has given us 5 eggs this week. This is the last three (we ate the first two). 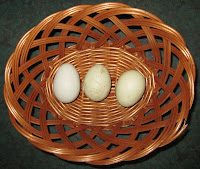 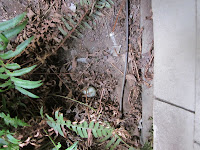 It would be real nice if we could convince the chickens to lay the eggs in the nesting box, but they've decided it is their sleeping space and we haven't been able to talk them out of it. In fact, it was funny the other day, because the roof of the nesting box kept opening partially, and we opened it to see all three chickens trying to squeeze into one side. When they were younger, they all slept together and now they've gotten too big. 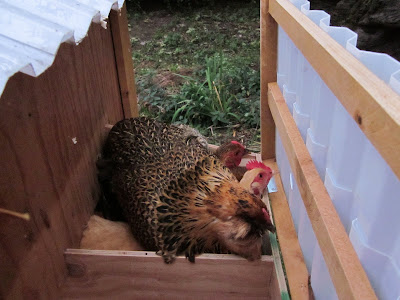 Posted by Sharon Kwilter at 4:40 PM