I decided to drive out to NW Portland and drop in at BASCO, a builder's appliance supply highly recommended by our contractor, to look at medium to high-end appliances for our remodel. I really needed to figure out what dishwasher to pick before the sale at Lowe's ended on Monday. And, unfortunately, BASCO has lousy weekday only hours, so it had to be today.

I worked with Derek and he was awesome—he's worked at BASCO for 12 years and is very knowledgable about the different brands and their expected lifespans. I walked in there really quite set on the Bosch, but I think he managed to talk me into the Miele.

Derek told me Bosch used to be a great brand—one of their best sellers—but in recent years their quality has really declined (with no decline in price). Also, Bosch had a huge recall last year because their control panels were sparking and they're now manufacturing motors with plastic parts in them.

So, with the hope we're going to get a good long life out of this appliance, I believe we're going to order the Miele Inspira. Unfortunately, though, we're going to have to come up with some sort of wood panel to temporarily use on the face of this dishwasher—he said a sheet of ¾" plywood would work. Oh well, I guess we'll have to do that. =)

Since, I was out and about, I dropped in for another errand I've been meaning to do: Buy Shasta boots! I also found her a "jacket" and I picked that up as well. (They also had a "knight" halloween costume that was very tempting, but it was very expensive and just a little too small. I managed to resist!) 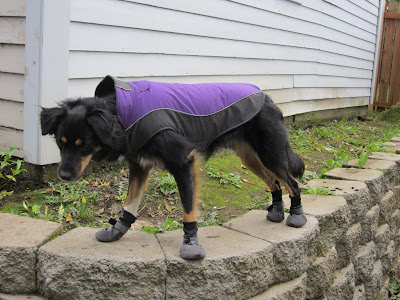 Shasta is not crazy about the boots, but I'm sure she'll eventually get used to them. We're really trying to find a solution for her muddy feet problem. Our hope is these will stay on in the mud and then we can just pop them off her feet when she comes in. I guess we'll just have to see once we get mud—it's been too dry this week to test them out.
Posted by Sharon Kwilter at 3:32 PM