As expected, the remodel quote was very high; nearly double our original la-la land budget. We kept trying to figure out what we could eliminate from the job or postpone easily, but we just weren't coming up with anything. So, in the end, we decided to raise the budget and do as much as we could now, then hopefully we won't have to live through the inconvenience of another major remodel ever!

Although it's definitely going to put a strain on our finances if I don't find a job this year, we took the leap of faith that this will turn out OK and we signed the contract. (Though, I did first very carefully read the contract and actually asked them to make some changes, which they agreed to.)

I feel pretty good about us being able to work with Craftsman Design & Renovation. 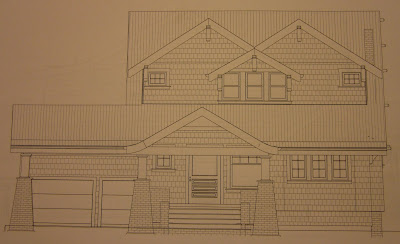 It's a pretty big project and should touch most areas of the house. That's going to be pretty unpleasant, because we are currently planning to live here in the house during the work, though I am in the market for a short term rental that isn't too far away.

In general, our project is going to include:
Plus tons of little fixes. The house will be fabulous when the project is done.

In the end, we decided to take out the master bathroom addition and we're instead going to turn that sleeping porch space into a closet. So, once this job is done, we'll probably quickly remodel the bathroom up there. But not now—we need at least one operational bathroom during this project.

We ended up taking the paint stripping out of this contractor's job; we'll go ahead and hire it out directly so we can avoid the markup. We also are going to hire out the roofing directly. But, for the most part, we decided to just let them come in and make it beautiful. We've never been very good at DIY house repair projects unfortunately.
Posted by Sharon @ Laurelhurst Craftsman at 4:36 PM