In this remodel project we've learned our house once had more classic Craftsman details. The French Doors on the living room and dining room are not original! (Now Sharon doesn't feel so bad for disliking them!) There used to be pocket doors! When the team was demo-ing the kitchen, they uncovered tracks for pocket doors. The Leonard's must have wanted to open up the living space so they expanded both doorways and removed the pocket doors and instead installed the French Doors. 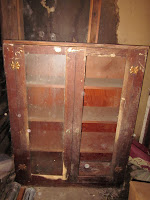 The Leonards also pulled collonades out of the front of the living room. Sharon discovered the evidence of floor patching and then we realized they had left one of the bookcases in the garage. Unfortunately, with how much the garage leaks, it's pretty far gone to save at this point. Maybe someday we'll put new ones in, but not this year. We've definitely more than exhausted our budget.

We also found evidence there was a bench seat in the entryway. Maybe they pulled it to put in the new HVAC in the 70's when they converted to gas. We're trying to figure out how to put one back, but we may just have to build a bench over the air intake that is open in the front, more like a pew. 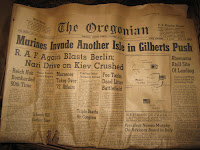 On the bright side, Mr. Leonard seemed to have a habit of putting newspapers into spaces before he closed them up. He apparently redid the kitchen in the early 1940's. We've now got quite the collection of newspapers from during WW2. It's neat to get the snapshot into the past. (Though, some of those headlines are astonishing: "Foe Tanks, Dead Litter Battlefield.")
Posted by Sharon Kwilter at 12:15 PM