Cleaned Out the Garage! 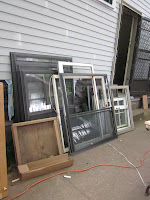 We finally gave up dealing with all the salvage leftover from the remodel demo. We just don't have the space to hold onto all this stuff. And now that we've visited the Rebuilding Center, it's become pretty obvious to us that it's pretty easy to buy used cabinetry if we decide we need some. So we pulled out all the stuff from the garage and called the Rebuilding Center to pick it up. They came out and picked out the best stuff and left the rest of it for us to try and get rid of. 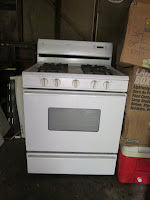 Sharon posted a free ad on craigslist for the aluminum storm windows and those were picked up within a couple of hours. (Have we mentioned how much craigslist rocks?!)

Once we round up everything that is left we'll try another free ad. Most likely anything that doesn't go will probably end up in the dumpster, though we are told the dumpster is sorted and recycled at the landfill. 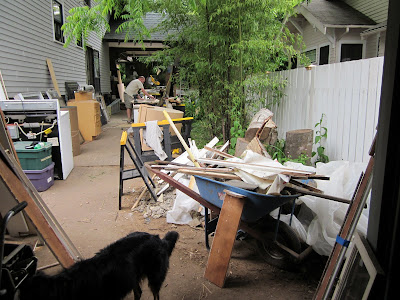 We are keeping most of the painted mouldings that were removed, primarily because it is old growth douglas fir and we might need pieces later for wood repairs in the upstairs rooms. Once we've got all the woodwork stripped throughout the house, we'll get rid of whatever pieces we don't use. We're in the process of de-nailing it so it is easier to bundle and store.
Posted by Sharon Kwilter at 4:16 PM