Sometimes you just get a muse to do a particular task and you go with it. Sharon had other plans for today, but woke up wanting to tackle the front door. Luckily, Jeff was willing to go off alone and do the errands today and Sharon stayed behind and stripped paint.

Our front door is veneer—douglas fir on the inside, oak on the front. The exterior was stained dark and the interior was painted white.

Sharon found the paint came off easily with the heat gun. When she discovered quite a lot of scratching in the bottom portion (probably from a dog), she decided to tackle the rest of the paint in the grain with a sander instead of chemicals. Luckily it's old veneer, so it's something like an 1/8th inch thick. It only took a few hours of sanding to do both sides. 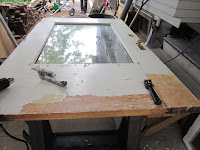 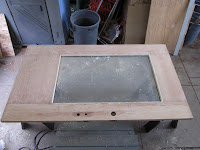 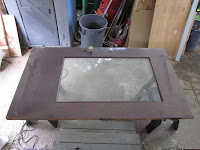 After she had been sanding the exterior of the door for a while she discovered the stain was actually an eggplant color!! It had just darkened so much over the years, that it wasn't until she had sanded down a bit of the top layer that she realized what color it was. Since purple is Sharon's #1 favorite color, it seems like fate that we must put purple back on this door! Of course, the challenge will be finding eggplant/dark purple stain. Sharon's only managed to find one Canadian stain brand so far.

We still need to strip the moulding around the window with a chemical stripper. Sharon didn't want to chance using a heat gun that close to the glass—it might break it. Hopefully we'll get back on this project tomorrow.
Posted by Sharon Kwilter at 6:38 PM