It's a good thing Jeff is still doing stuff. (Sharon has not been productive this week.) Jeff installed the new locks on the doors in the basement. We actually had those doors taped shut. It is so nice that they finally latch (and lock)!

This morning we drove out to One Green World Nursery out in Molalla, Oregon. We bought two apple trees—a Liberty dwarf apple tree and a columnar Scarlet Sentinel. Jeff got them into the ground right after we got home. It's pretty hard to show a couple twigs sticking out of the ground, but he ended up planting them in the front yard. He also planted the rest of the natives in that front berm today. The new plants are on the left side of this picture. 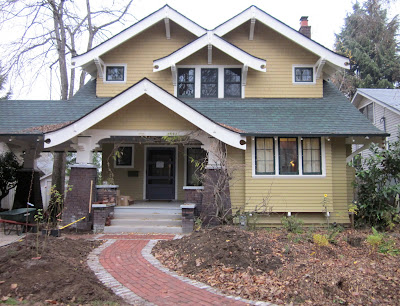