Mucking Out the Basement

We've spent the last couple of days mucking out our basement "apartment." Even after two days of cleaning, the space is definitely not photogenic.

Sharon sold the old living room furniture we bought right after we moved in. Since we've ordered new furniture, we decided it was time to let the couch go, but when the buyer discovered the couch was part of a set, she really wanted the other two pieces as well. So, we negotiated a deal and she came out last Sunday and picked up all the pieces.

And while we had the space, we also decided to move down the large rug from the living room. That took a lot of shuffling to get it underneath the bed. 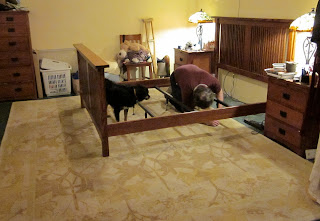 Sharon had already bought a replacement piece—a futon—for the basement.  We had to put it together. Real fun. (The futon is actually quite a nice looking piece of furniture; it has a solid panel back. We're hoping once we move the bed out of this space, this can be our occasional crash bed during only the hottest days of summer.) 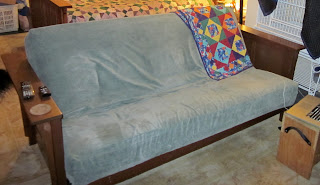 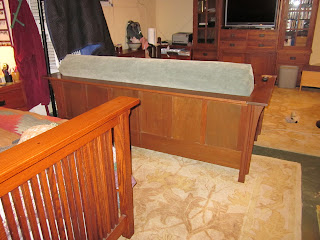 We've also been trying to move stuff out of the space that doesn't really need to be here. And we've been trying to scrape six months of dust off the furniture. The space is still a dive, but it seems much more livable simply because it's cleaner.