Thanks to us both getting sick, we've now managed to be mostly unproductive for nearly two weeks. Ugh.

The one important thing we've managed to do this week is to make a decision about the garage. We've decided to hire one of the contractors we got a quote from last month, Tim Austin. We called three of his references and got glowing reviews, looked up his contractor's license, and looked at lots of pictures of his earlier projects, so we're pretty confident we'll end up with what we are hoping for.

The current design plan is to go with the garage with the rotated gable because it makes the most sense given what the City will allow us to build. 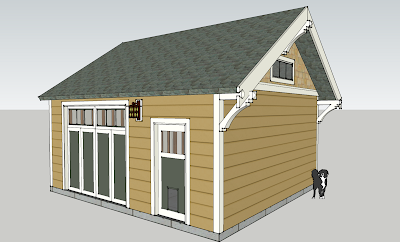 We're going to go ahead and tear down the existing garage and replace the slab because the existing slab has a couple of deep cracks that run its length in both directions. I don't think it makes sense to spend a bunch of money residing and re-roofing a structure that won't last at least 25 years (the amount of time we plan to live in this house).

Now, we just have to feel well enough next week to empty out the garage so demo can start as soon as the permit is approved and Tim has time in his schedule for this project. Here's to hoping we have a good week.

Posted by Sharon Kwilter at 4:57 PM