We've had a relatively unproductive week this week, but we did get started on cleaning up the driveway for our garage emptying project.

As we've said so many times before—Craigslist rocks!! We managed to get rid of a very large pile of cardboard and a large mound of broken up concrete. We didn't have to pay to dispose any of it because somebody came and picked it all up! This large pile of rubble turned into this small pile of rocks. Unfortunately the last guy who came by couldn't quite fit the whole pile in his truck, so we still need to deal with this last bit of stones. Hopefully, we can reuse some of this pile in the rain gardens. 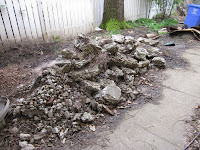 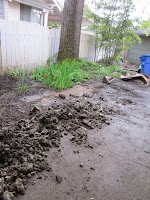 We also had an unusually large pile of cardboard. At some point during our remodel last year we told our contractor we wanted to keep cardboard to lay out on the lawns before covering with mulch so we could kill off the grass. It turns out the re-siding project did the trick to kill the lawn, so we found ourselves with a whole lot of cardboard stored in the garage that hadn't gotten thrown into the dumpster before the end of the job. Luckily, through craigslist, we found someone who actually cuts up cardboard to build planter boxes that can be "planted" in the ground at the end of the season.

On the garage front, despite Sharon's earlier rant, she continues to pursue our rebuild plan. We've slowly started to empty the garage and once we get most everything out, we will really inspect the condition of the cement pad and the wood structure. If all is well with the existing structure, then we'll probably go ahead and patch it up and live with it. But if the structure is as bad as it looks, we'll have to pull a permit anyway to do dry rot repair, so we may as well go ahead and rebuild. We think we found a contractor who will help us build for an amount close to our budget.

This weekend is mostly going to be spent working with plants. On Saturday, we'll both be working at the Multnomah County Master Gardeners Incredible Edibles Plant Sale. Then, on Sunday, we'll no doubt be planting quite a few vegetable starts.
Posted by Sharon Kwilter at 8:30 PM