I clearly have a weakness for carving because even though I already had a secretary, when I saw this one on craigslist I couldn't resist the temptation. 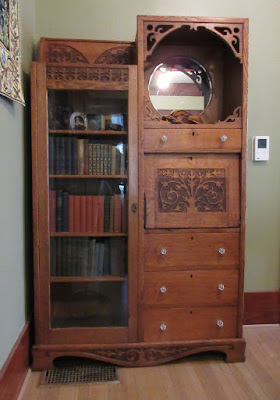 I bought this from one of the most difficult sellers I have ever dealt with. Had I not wanted it so much, I definitely would have walked. It has some issues we were not aware of when we bought it, but I think we still got a good deal.

When we bought this the seller had the door uninstalled and wrapped up separately. She said it was because she was worried the glass would break, but it became clear when we unwrapped it why she didn't have it out. 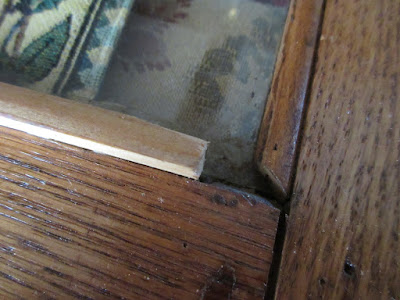 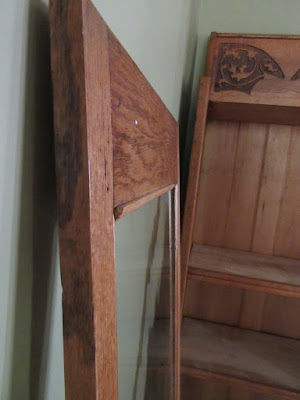 Somebody glued on 1/2" quarter round. They needed to use 1/4" quarter round. I'm not sure why they bothered since the glass was not in danger of falling out since it still had stops on the long edges. 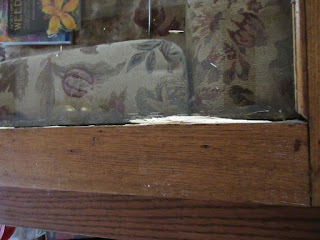 To remove this quarter round, I tried soaking it in vinegar as some websites suggested but that didn't work. Finally, Jeff just tried hammering the thing off and it worked, mostly. We've actually got some 1/4" quarter round leftover from our leaded glass project we can try once we get this cleaned out.

Also, the door binds really badly. I think the door joints have expanded and it's now too wide for the space. I thought about sanding it down a bit on the hinge edge, but for now I've just forced it shut. Luckily, we don't have to open the door very often. 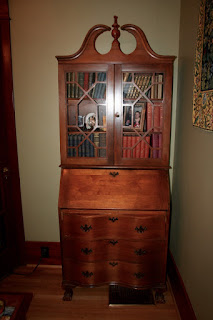 I think this looks much better than the old secretary, which was a family hand-me-down. I think the old secretary was Colonial style. The folks who bought it from us on craigslist were very excited to have one of their first pieces of real furniture. 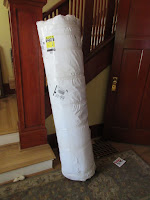 The new rug arrived a few days ago already and Jeff's been too busy to help me shuffle furnishings.

Posted by Sharon Kwilter at 6:07 PM