This is how the bricks looked when we moved into this house in 2006. 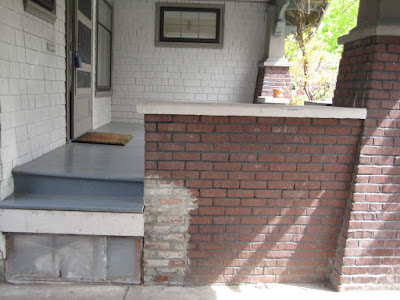 I believe there used to be a set of brick steps here that were removed, but I could find nothing in any pictures I've been able to find. This also would have been a good spot to step into a wagon, though this neighborhood was built just as cars were coming into use (1910s). So, we don't really know what the original design looked like. With the width of modern cars, however, the stairs really don't fit so we didn't restore them.


Shortly after moving in, we hired A Better Chimney to repoint the bricks and also repair this bad patch. This is how it looked when they finished. 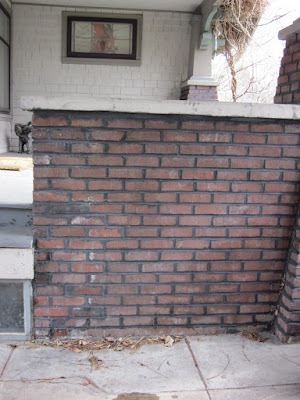 Much better, but we still had a step that dropped about 2 feet to the driveway. It was unsafe. So, last summer, when we wanted to install a charging station for Jeff's plug-in hybrid, we decided to get it fixed. We hired A Better Chimney again, but this time it didn't go so well.

Pedro came out and tore it all apart, but then he disappeared for weeks and weeks. I had to constantly pester him to come out and make progress. It turns out he was diagnosed with cancer and wasn't really able to work on this project, but we had a large hole into our basement all winter. 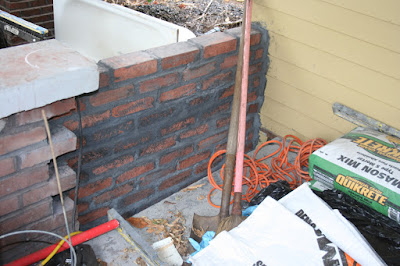 Finally, sometime this spring—after much prodding— he finished installing all the bricks. 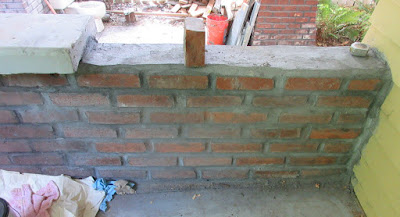 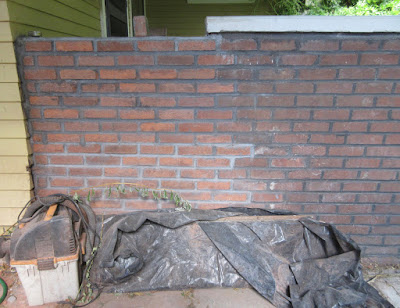 A couple months ago I got in a fight with Pedro and he hasn't spoken to us since or come out to finish the project, so we have realized he decided to abandon the job.


The black plastic package at the base of the wall is supposedly the cement cap for the top. I guess we'll try to figure out if we can finish this. I don't particularly care for the color of the new bricks as they really don't match, but we could not easily find a better match. I am going to explore brick dye and see if we can improve the color. (I've already bought samples to test.)

Posted by Sharon Kwilter at 6:44 PM

Email ThisBlogThis!Share to TwitterShare to FacebookShare to Pinterest
Labels: Masonry