Earlier I had been planning to purchase mostly new appliances for the house in Redwood City. I had spent a fair amount of time with Consumer Reports and the Sears website picking them all out. Then I goofed up and missed their "lowest prices of the season" sale; it ended on May 2. Oops.

So, because of this, I have reconsidered whether we really want to replace everything. Long term, probably, but short term I think we'll just replace what we have to. We need a new refrigerator (because our old one doesn't fit in the new house and it's the wrong color) and a gas dryer (because we have electric and there's only a gas hookup). 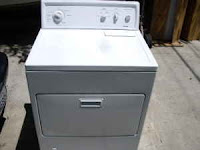 I cruised around on craigslist last night and found a matching dryer for our current washer. We have a Kenmore Series 80 washer that we bought from the renters at Dumas (they were moving out as we were moving in and they offered us a good deal). It looks like we may be able to get something for $100 to $200. Since we intend to mostly hang our clothes to dry at this next house, I think we'll go ahead and try and get one of those used ones instead of buying a new set, at least for now.

And we're also trying to decide about what to do about the refrigerator. The space where my grandparents put it is only 30" wide, but refrigerators that narrow tend also to be really short. I really like having a big refrigerator so we're thinking about putting the refrigerator on the other wall. It won't look as nice when you walk into the kitchen, but it will be closer to the stove and sink. I'll probably cruise around on craigslist tonight and see what I can find that isn't too distant. Maybe we'll get lucky and find something nice for a good price, otherwise we may go order something new at Sears.

Today, I'm packing, as usual. We've just about got the "library" bedroom packed; there's just a few things left in the closet and I'm packing them up today. We should have that room done tonight. Then I'll probably start in on the office. The office is loaded with too much stuff and most of it is going to go into storage. Ugh, I'm so tired of moving. I was hoping this move would be the last one, but now due to the crappy economy, we're having to hold off buying a house in Oregon. Oh well.
Posted by Sharon Kwilter at 9:35 AM