Well, it's hard to believe it's already Sunday night.

Yesterday we started moving into storage and did two loads up to San Carlos and also dropped some stuff by Redwood City as well. I forgot my camera so didn't get to snap any pictures.

Today at around 11AM we managed to drag up tail ends back up to Redwood City to get ready for termite tenting. You're supposed to clear a 12" margin around the house, including plants. We did the best we could. There are some plants that get a bit close, but they're supposed to be able to work the plastic walls around plants somewhat. Also, you need to water them very deeply so the poison doesn't work its way into the soil. 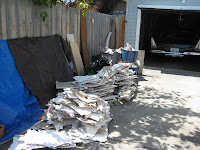 When we arrived, my Aunt was already there digging up plants, transplanting them further from the house and watering. So, Jeff and I worked on relocating the demolition debris to the driveway so we could take it in for recycling/disposal as soon as everything is done.

Then at about 1PM, Jeff and I headed out to Portola State Park for a Mother's Day Picnic. Shasta found a new friend, my cousin Danna, who is going to be a vet in a year. Though, it was very disappointing when we learned Shasta couldn't go hike with the group; poor baby. 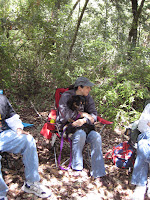 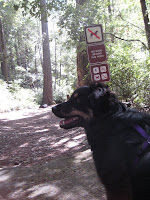 Since we've been so busy with the packing and remodeling, we've had a hard time keeping up with Shasta's playing and walking needs, so we've decided to send her off to doggy camp. Sharon booked her at K9 Casa in San Jose starting on the 15th through at least the 27th (the day after the movers move the furniture) and perhaps through the end of the month.
Posted by Sharon Kwilter at 8:21 PM