Well, I went out this morning to be a defender of the plants around the house for the termite tenting. I needn't have bothered, because they were really good about going around them. Though, it was good that I was there, because they had the wrong address written down and they might have tented the neighbor's house. =)

We'd thought they'd start early, so I got there at 8:30 AM. Well, they actually didn't show up until 11:15. An extra hour of sleep would have been nice, oh well. Anyway, they showed up at 11:15 and they had the house entirely tented and ready to gas by 12:15. It was amazing how fast they were. I didn't stay until the bitter end, but I got some good pics of the house tenting in progress.

While I waited for them to arrive, I continued to water the plants around the house, pulled up the carpet pad and tacks in the hallway in preparation for the new carpet on Friday, and did some sweeping up in the house. There is a fair amount of construction droppings on the floor, i.e. bits of wire, screws, chunks of drywall. Overall, I had a productive morning, though it would have been nice to not rush out there so early. I didn't even have breakfast because I was running late.

During the rest of the day, I'm hoping to make more progress on packing and cleaning Cupertino. I'm trying to have Cupertino look "presentable" by Friday since the landlord is already asking to bring people in to see it and I've managed to put her off only until the end of the week. 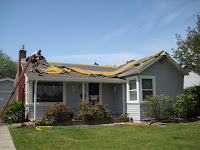 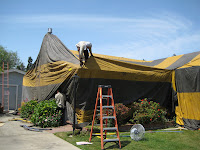 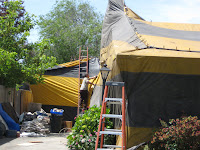 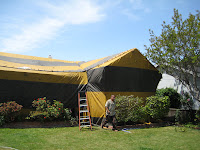 Posted by Sharon Kwilter at 1:14 PM