At Jeff's request, I signed us up for Netflix on Friday. Well, with their instant download option, we've managed to watch about six movies since yesterday afternoon. Of those that we have watched and would most recommend are: The Secret Garden, A Civil Action, Hitchcock, Greenfingers and, less enthusiastically, The Other Boleyn Girl. We actually liked the Boleyn movie better until we went and investigated how much they had butchered the actual history; it at least had fairly decent costumes. The last movie, Then She Found Me, I didn't particularly like.

Since Shasta is coming up on a year old, we can finally let her "tow" Jeff. He used to take her for runs on his skateboard; he would put on her harness and let her tow him around several blocks. It would wear her out and it was fun for him, too. But then we read a report saying you should not put puppies under those kinds of conditions because they're still growing, it is not good for their skeleton, so he stopped doing it. She still gets excited when she sees his skateboard come out of the corner.

Anyway, we were investigating better harness rigs for her, so she wouldn't get her feet under the skateboard wheels anymore. During the search, we found a neat scooter Jeff wanted. It's a scooter built for the purpose, made by Pawtrek, and it has a side harness rig. It was pretty spendy, but I expect we'll be using it for many years so I went ahead and ordered it for Shasta and Jeff this morning. 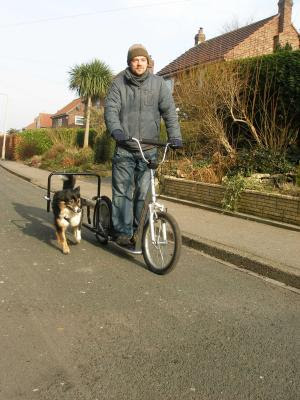 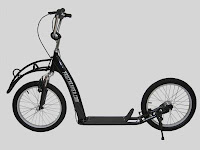 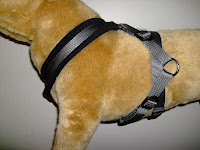 Posted by Sharon Kwilter at 1:23 PM