Jeff and I got a lot done today. We worked on projects this morning we've needed to do for a while... 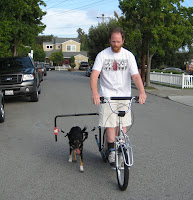 Jeff took the dog for a run. We've decided that the arm that holds the dog to the scooter is really just too big for Shasta, so we'd like to find a metal worker who can help us rework this arm so it will be four or so inches smaller. That will also make it easier for Jeff to travel on the sidewalk, because this scooter is very wide with the rig for the dog. 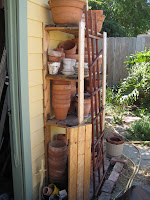 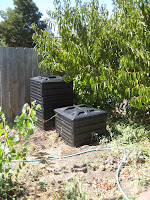 Anyway, after his ride, Jeff set up his new compost bins we finally received from the County. (It took over 9 weeks to get them from when I ordered them.) We also had to pull all of these terra cotta pots off of the racks and bolt the racks to the house before putting the pots back. It's not the strongest rack and we thought it would hold up better if it was supported by the house. (These are pots leftover from my grandmother.) 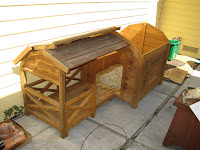 And when we finished those projects, Jeff started putting together the dog house we bought months ago. Unfortunately when we bought this used, we didn't get all the bolts, so he had to interrupt his assembly efforts with a trip to the hardware store to find some replacements.

It's gotten really hot outside, so now Jeff is taking a nap. Hopefully he'll be able to finish up the dog house later this evening.

I did at least six loads of laundry this morning.
Posted by Sharon Kwilter at 3:15 PM