They've made a couple more days of progress on the basement. The walls are now dry enough to begin painting. Gee, if I had realized they'd be painting this week, I probably would have signed up to do it myself. Though, in reality, I didn't really expect to be done with my ToDo list by now. We're painting the walls with a waterproofing paint called "Barely Peach." Now I'm wishing I picked something darker. Oh well, I'm sure the light walls will be nice in this dark basement. 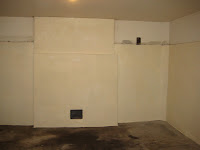 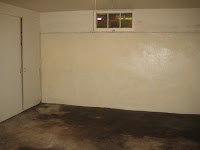 They've jacked up the front part of the parlor and now the room upstairs is nearly level. =)
Troy has nearly completed replacing the perimeter boards and is now pouring new footings for new support beams he's putting in soon. I, of course, had to memorialize the occasion by carving in the damp concrete. 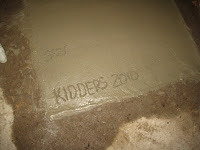 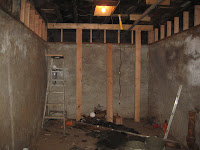 Posted by Sharon Kwilter at 1:17 PM