I've done precious little on the house this month, except for one thing—I cleaned my sewing room. I spent a whole day clearing out the room because it was a HUGE mess and extremely dusty—and I wanted to sew. This room became the dumping staging area while the rest of the rooms had their floors refinished, so it was all filled up with boxes and other stuff. And everything was covered with a thick layer of dust from nearly two years of remodeling.

It's still not as clean as I'd like, but it's much better. I've kicked out most of the boxes that need to live elsewhere. I've spent at least an hour vacuuming dust off of everything! And I managed to get the floor cleared off (at least for a little while) so I could vacuum. It's almost a nice space again (but still not quite picture worthy).

I also had another too-large pile of quilting cottons to iron. I've got a weakness for William Morris reproduction prints (despite the fact that I probably have a lifetime supply), so I spent several more hours ironing and folding up fabric for my fabric shelves. I finally had to evict the last shelf of plastic tubs and the bookcase is now entirely fabric. (This is my limit. If I get more fabric than will fit in these shelves, I'll have to get rid of something to make room.) 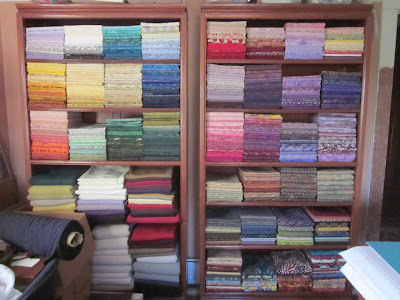 I also cleaned off the other bookshelf for plastic tubs. Unfortunately, I have a few more than will fit, so it's time to do some downsizing. Or maybe I'll have to kick out the stencil supplies. =) 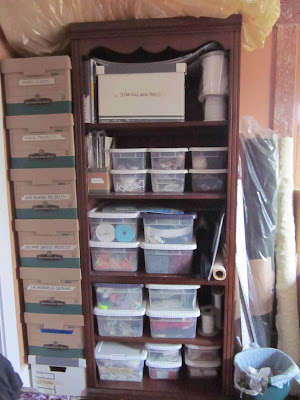 The tables still need some straightening before I can take full-room photos.

This is the last bedroom that needs paint stripping. I'm hoping I'll be in the mood to move out of here later this year, but realistically, since we have so many other higher priority projects, it will probably be 2014.

As an aside, and mostly to remind myself for the next Rejuvenation Period Basics sale, the light sucks in the sewing room, especially at night, and desk lamps aren't adequate. I need some sort of task lighting. I'm thinking I might like to try one or two of these Bend sconce lamps.

Posted by Sharon Kwilter at 1:48 PM