Because our kitchen was on their Kitchen Tour last April, we were gifted with a free membership to the Architectural Heritage Center (AHC), so I was determined to take advantage of my ability to research through their records before our membership expired. We made an appointment for last Thursday and got to take a look at their collection. 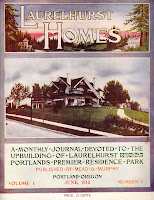 While, they did have three sales brochures I had never seen before, and a large map, their collection on the Laurelhurst neighborhood was—disappointing. They didn't have any pictures of individual houses (other than those in the sales brochures) and nothing resembling architectural plans.

Because of my recent efforts digging through the Oregonian archives, I have better information. So, I've sort of taken on the challenge of improving their records for Laurelhurst. Over the next couple of years I am going to put together my Oregonian articles into a transcribed document with whatever photos I have been able to glean and put them all together in binders. (I've already started—I've put together 1908 through 1910.)

Although, the one high point of the visit was getting some more information on our house's builders; Spencer & McCain were listed in "Architects of Oregon" by Richard Ellison Ritz. The partnership included Arthur W. McCain, Ida F. McCain and Charles Spencer. And once I had their full names, I was able to find more information . . . at least for Ida.

I found an article published by the San Francisco Chronicle on Ida McCain, "Renegade Ida McCain brought character to hundreds of homes for the Bay Area's middle class." The wide columns on the basic bungalow pictured looks just like our house's. Apparently the McCain family breezed up to Portland in 1909, designed a bunch of homes, then breezed back down to Los Angeles by 1914. Then a year later, Ida was in San Francisco where she had a successful career for a number of years, until the mid-1920s . . . then she establishes herself as an independent architect and builder. It's not clear how successful she was after that. She moved around a number of cities, but I don't see much information about many houses being built.

She also appears in a recent book: "Early women architects of the San Francisco Bay Area : the lives and work of fifty professionals, 1890-1951" by Inge S. Horton. I've ordered a copy through the interlibrary loan system.

I don't know why I get so obsessive about things like this; it sort of becomes like a game to see how much information I can find. Google is really invaluable to provide leads. And while I'll probably never find a good picture of our house from the 1910s or 1920s, it is fun to try. So my quest continues; next up, the Oregon Historic Society.