We finished another project! I've been having a lot of fun building stuff with our giant pile of salvaged lumber. This time a small bench for our hidden garden. I can't really say that we made it for free like many blogs do because ultimately we did buy the wood and the expensive white stain, just not for this project. But we spent no additional money to finish this project.

I decided to spend a bit more care with this wood because it is going to continue to live in the weather. First I sanded it, then I stained all of the edges with at least two coats of the opaque outdoor stain we used on the fence and pergola.

This bench was actually made from a mix of cedar and fir scraps. I think the cedar was leftover from our fence project and most of the fir was leftover from building the shed. But I'm pretty sure some of the sketchy boards we took 9-inch pieces from were still kicking around from when we demolished the old garage in 2012. There were some boards that were mostly rotted but if they had a good 9-inches, we cut it off and used it. The parts that were too far gone to use are now loaded in the back of the truck, bound for the Metro recycling center.

This will be its spot in the hidden garden. The guys have dug a trench to make a pad for it. 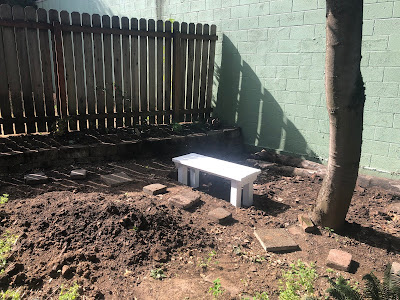 Anyway, if you guys want to build your own bench, this project was inspired by these two designs available free online:
Build a Simple Outdoor Bench
Simple Bench Made From 2×4’s

We ended up making two changes to the design. We had four short pieces of pressure-treated 4x4s and I thought they would be better for the legs so I adapted the frame to accommodate the chunky legs. I also rotated boards so I could still use the 2½" deck screws.

Then, because the salvaged boards we had on hand had some extra length available, Jeff cut the boards that attach the legs together with an angle in order to provide more support to the long top edge boards. Now they have some additional support beyond just the screws attaching them to the frame.

As we were assembling the pieces, I realized we could attach some of the top filler pieces from the bottom so we'd have fewer visible screw heads so our assembly diverged from the assembly shown on those instructions. This is how we made this bench.