I can't believe it's already August. This summer has gone so fast. I hope we have time to finish all the summer projects on our list.

I'm still spending most of my indoor time obsessing about the yard. When it was raining the last several days, I sifted through and inventoried all our old seed packets. We had them stashed all over the place; hopefully, I finally managed to get all our seeds in one place. It turns out I have a bit of a seed-collecting problem I hadn't even noticed. I probably had nearly 100 unopened seed packets. LOL

Quite a few packets were more than 5 years old (we had a bunch that were 17 years old!); I discarded all of them. About 20 packets date from 2017 when I dreamed about planting the front parking strip the first time. And there's quite a lot from this spring when I did a second round of shopping for the planting strip, obviously forgetting I'd purchased the first batch of seeds.

Anyway, a good 50% of the seeds were for full sun only and I sifted through and gave away all but the ones I liked the most. Our lot is too shady and I decided not to hang onto seeds I probably won't get around to using before they lose all viability. I'd rather give them away to someone who can use them now.

Now that Jeff has cleared out some room in the backyard rain garden, we have another spot with full sun to plant in. And I have quite a few pansies, which are short enough to plant amongst the vegetable garden next year.

So, I decided to get serious about growing plants from seeds. Some of the flowers are very pretty and I'd like to see them. We struggle a lot with sowing outside because we are lousy at identifying new shoots that are seeds we planted versus those that are weeds. We do far better when we set out small plants that are easily identified. So, I poked around for a good way to start seeds indoors over the winter.

I found inspiration for setting up a growing station with a 48-inch storage rack we already owned. I bought the cheapest two-light fixtures I could find and some aquarium fluorescent bulbs. The plant trays and covers were relatively inexpensive and I'm planning to reuse 3 and 4-inch pots from plants I bought this year. (Yes, I've already disinfected them with bleach rinse.) 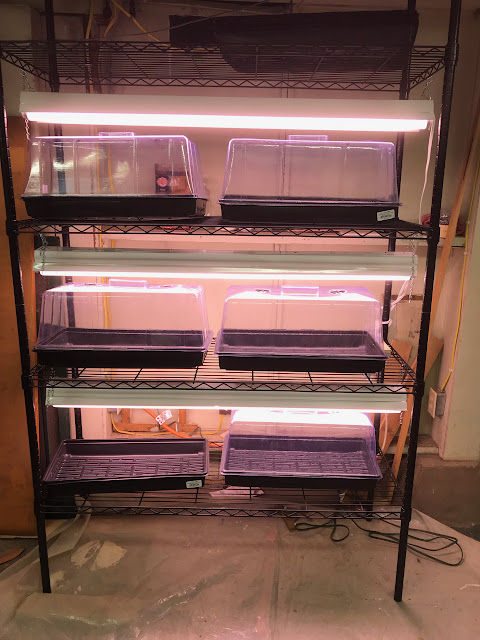 I don't think the lights will provide enough heat to keep the trays warm, so I've also ordered, but haven't gotten yet, four individual heating pads for under the trays. The basement gets really cold in the winter and I'd like these plants to live.

The past two days, I've been making a spreadsheet listing all the seeds we have, along with the pertinent information I need to grow them from seed, in particular when to start them so they're ready to go outside after the last spring frost.

I'm sort of anxious to get started, but it's still too early. I think the first batch of seeds needs to go in during November.

Posted by Sharon Kwilter at 4:38 PM