We're having a really productive day today. Jeff went and picked the rest of the plums off the tree in the backyard (about two lunch size ice chests) and we have the flat of apricots he bought at farmers market yesterday. We decided that today would be a good day to get through the fruit. 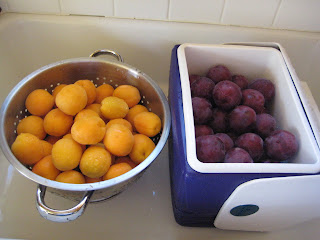 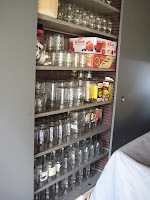 Yesterday, we grabbed the last of the packed canning jars out of storage and got the last of the cabinet in the garage unpacked. I had expected we would need to sell some, but they all fit. I think we're set for jars, at least until we start canning fruit slices. We mostly can jams, butters and syrups. We tend to just buy canned fruit, probably because we've never had a cheap and plentiful source of fruit (excluding blueberries, that I only like in very small quantities). 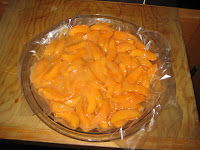 We mixed up four apricot pie fillings and put them in the freezer. Plus, Jeff is going to make up a pie this afternoon for us to enjoy this week, as a reward. 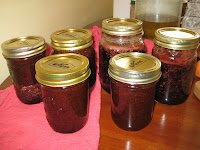 We've also worked through two batches of jam. One batch was just plum and the other we did about half plum and half apricot. That batch actually cooked much faster and looks better (less foamy), so I think that's what we'll do for the rest of the batches.

We're taking a well-deserved break for a couple of hours this afternoon and then we'll resume our canning efforts. We'll probably do another two batches today, and if there is anything left, I'll do some more tomorrow.

We've also got two small peach trees in the backyard, and they're starting to look close to being ripe. Maybe we'll have a batch of peaches for next weekend.

This morning, the last of our furniture sold on craigslist. Now we're mostly down to the vintage old stuff left from my grandmother and my Dad's stuff. I'm still trying to decide between having another garage sale and just donating it all. I guess we'll see. 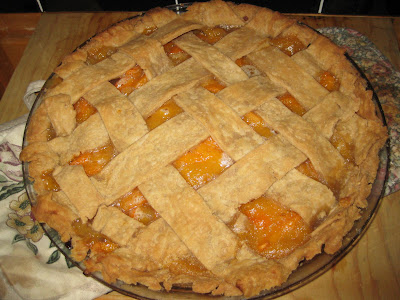 Posted by Sharon Kwilter at 1:02 PM