I had a "duh" kind of moment a couple nights ago. We have been using a futon in the living room "temporarily" until I found couches that were in a more suitable color. I've been surfing on craigslist for weeks now and cannot seem to find something to my liking that is near enough to risk the trip to see them. I've had two disappointing visits to look at couches as they just weren't the colors they looked like on craigslist. Colors don't photograph well, I guess. Well, last night it occurred to me I could just buy a new cover for our futon and skip buying a couch for now. We do still want a loveseat, eventually, (for when we have company) so we may ultimately end up replacing the futon later on. But this way I won't feel rushed to find something.

Jeff went this morning and picked up our new Highlander (he took CalTrain to the nearby station and walked to the dealership from there); lucky him. I still haven't ridden in it, as he just continued on to work. He says its nice. We'll add pictures to the blog tonight, once he brings the camera home. 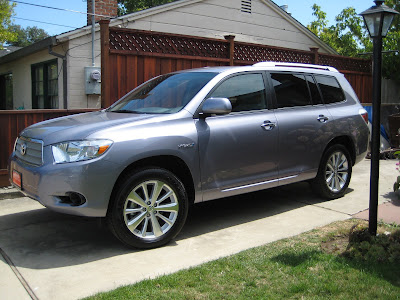 We've had an uneventful week this week. Dog Obedience class Tuesday night. Barony of Westermark SCA meeting last night. Unfortunately, I've been particularly unproductive this week during the days. I've sold a couple of things from craigslist, but for the most part our ads are just expiring without inquiry. I'll probably end up donating most of it which is also fine.

Yesterday, I had a binge at Fabric.com. I decided I needed a few more yards of the kitchen fabric when I realized I hadn't made them full enough in my plan so I needed to buy another 4 yards or so. Well, I bought quite a lot of fabric when I discovered they had about six different batiks for $4/yard. I bought 16 yards of purple to use for a backing for my yellow and purple lightning quilt I have in progress. It's actually a really nice scrappy quilt that Jeff designed with lightning bolts and pin wheels.

(Karen, do you have any ideas for quilting it? I'll be happy to send it off to you for quilting, if you're inspired. It's King Size, or will be when it's done later this year.) 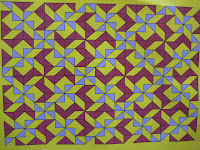 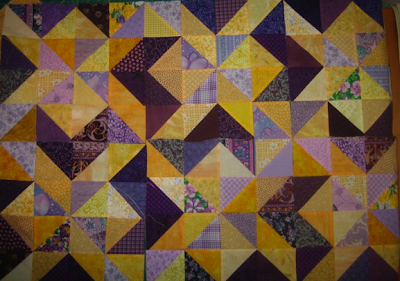 Tonight, we're taking delivery of a quarter of a grass-fed cow from a way-not-local ranch. We're paying about $6/pound where WholeFoods charges $12/pound so I figured it was worth trying it this way despite the inconvenience of having your freezer full of meat. It's apparently about 100# of beef, so I think that will be our meat of choice for the next several months. I think we should figure out how to replace our BBQ we gave away last fall. Not sure if we'll buy used, or if we'll buy some cheapy one to last us the couple more years we're likely stuck here.
Posted by Sharon Kwilter at 1:32 PM