Yesterday we enjoyed a barbeque at my father's house in Santa Clara. (Thanks Dad!) My brother, James also showed up with his family and Shasta had another evening of playing with Lizzie. Then we wandered over to the nearby grass field and watched the local fireworks display. Shasta did pretty well for her first scary fireworks event.

Jeff has worked most of the weekend, excluding dinner yesterday. He worked yesterday afternoon and then headed to work this morning at 6AM and still isn't home. So much for my plans to take a load of debris to the dumps. Oh well, maybe next weekend.

Today, I've been trying to finish up the sewing room Roman shades. I've gotten them to the point of sewing on the rings and I'm having a hard time staying on task. I keep getting distracted with my laptop.

I think that we're going to order the Toyota tomorrow. We located one in Sunnyvale and Jeff dropped by and checked out the amethyst. The color is subtle and changes, depending on the light and angle. But it's probably good enough; I think we'll go for it.

After dinner yesterday, the family walked over to check out a 1912 Craftsman house about 3 blocks away that's been for sale for about 10 months. I've been watching it since last September or so. Back at that time it was $1.15M, now it's down to $750K. When it had the latest price drop I was really tempted, right up until I checked out the inspection reports which revealed to me that it was a money pit (it needed $150K of foundation work, just for a start). Oh well. After the visit yesterday, though, I continued to dream about the possibilities, but, today I see that it went pending, so I guess that's out as an option. 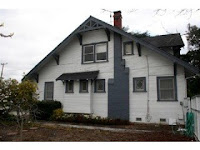 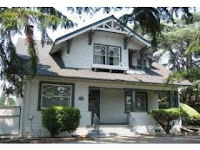 Even though I'm not seriously looking at houses right now, (really, I'm not) I usually check out what's available in Portland and Corvallis every couple of weeks. The kind of house I'm looking for is very specific (early 1900s Bungalow with the original unpainted woodwork on an oversize lot) and I don't think they're easily available so I keep watching for good houses to hit the market. On Thursday, I found another beauty in Portland, but it's surely overpriced. I think if it were closer in to downtown, they'd be able to get their price. But, according to my quick research, its neighborhood is loaded with much cheaper large houses and a ton of foreclosures. I think they'll have a problem getting their $679K asking price. But I'll keep watching it. If the price comes down to around $500K, then I'll probably get real interested. =)
Posted by Sharon Kwilter at 4:31 PM