Our house has only had three owners (including us) since 1911. The first family was the Mannings who lived in the house until the late 1930s. Then the Leonards bought the house and lived in it for 11 years. When they bought another house, they simply rented this one out. The Leonard family still owned the house when we bought it in May 2010.

Anyway, Frederick J. and Emma Manning bought the house in 1911. After some research, I finally found one of the living granddaughters of the Mannings, her name is Francie Fessler and she lives in Salem, Oregon.

Today she, with her daughter and husband, came and visited. She didn't have much in the way of pictures of the house, but she generously shared photos of her family and some fascinating family history. 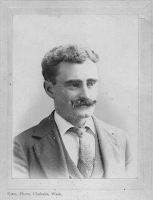 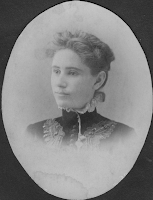 Frederick Manning bought the house in Oct 1911; with Francie's help I was able to find the short article in the Oregonian:

...Frederick Manning, another Washington timber dealer, has purchased from Spencer-McCain Company a residence located on Multnomah Street, near Sandy Boulevard, for $6000. It also was bought for a home. Both residences are among the best erected in Laurelhurst Addition.


Mr. Manning, unfortunately, died in 1915, probably from an asthma attack. Emma Manning was left with $300 and 3 kids, but she somehow managed to stay in the house. She took in boarders and she made hats. Francie told me her grandmother was very proud and would not accept help from Frederick's brother when offered. And, despite all these hardships, all three of the kids went to college.

Unfortunately, this was the best picture Francie had of our house. 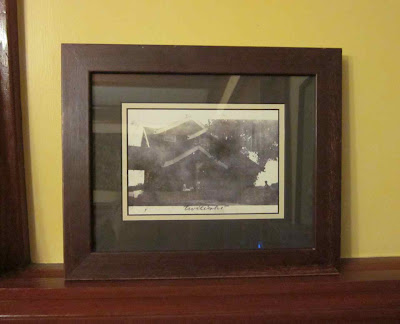 She thinks her cousin, Charles Wright in Texas, probably has the best pictures of the house. I'm hoping we'll be able to retrieve some of them someday. (She's going to try.) 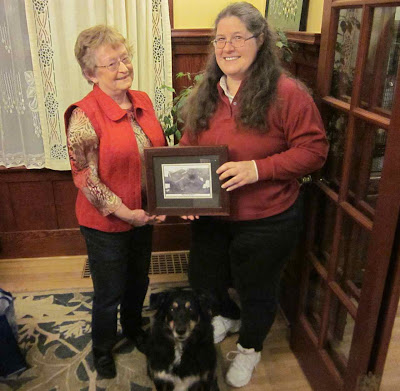 This is Francie and I posing with the photo, which she brought as a gift. Thanks Francie! (I guess Shasta just wanted to be in the picture because she went and stood there and waited while Jeff took the photo.)

Last year, we also met Lois Leonard, the youngest daughter of Thomas H. and Ruby Leonard, who bought the house in the late 1930s. (I still haven't gone to the City to get the sales records; I'll do it one of these days.)

I was told by Lois that her mother didn't like the house because it was "old fashioned" and I'm quite sure that's when they went through and painted all the woodwork, removed wainscoting and the colonnades, and replaced the pocket doors with French doors. And, remodeled the kitchen, obviously.

Lois remembered after about 11 years, they moved into a new house and kept this house as a rental. That's probably why much of the remaining wood is still in place. And there wasn't a lot of additional remodeling, so we were able to restore it as well as we did.

I did get a photocopy of an old picture during escrow from the Leonards, but I can't locate that tonight. It's packed up from moving the files down to the basement from upstairs and we haven't unpacked yet. I'll add it when I can get it scanned.

There are three Leonard kids and two of them still live in Portland. Lois has been very generous with her photos, which are few, but hopefully as time passes I'll be able to beg and cajole more photos from Richard and Janet.