At long last, we are finally sifting our basement "lair" (soon to be known as the library and family room). This is the space in the back half of the basement where we were living and sleeping during our remodel, and where we continued to sleep until we refinished the bedrooms last December. 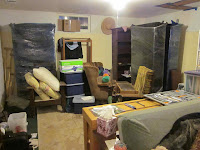 When we moved into the upstairs bedrooms in December, we had the movers bring back the rest of the bookcases; they're still sitting in the same spots, wrapped in moving blankets. And we still have a huge pile of books in boxes sitting in the next room. I probably shouldn't show a picture, because the space is such a mess, but I suppose a bad Before picture makes for a more impressive After picture.

We obviously have not been motivated to make forward progress on this project. But, the weather will be nice soon, and if we don't turn our attention to this basement project, we'll find we've paid for storage for another year. At this point, we're just wasting money.

Really, all we have to do down there right now, is pull down the ceiling and finish rewiring the last of the knob and tube so we can close out our open electrical permit. (We left it open after the garage project because the electrician said it would be OK to include the basement as well.)

Anyway, in the last couple of days we've packed up the full bookcases down there, as there is no sense everything getting covered in sheetrock dust. And the bookcases will be a lot easier to move around if they're empty.

We are still vacillating on the scope of the project. We could just fix the wiring and call it good for now.

Or we could cover the ceiling, though since we still haven't finished the master bathroom remodel, I don't want to install sheetrock again. I would prefer to come up with a removable surface. I was thinking about installing sheet beadboard, sort of like suggested in this blog, then we could take down panels where we needed to access the plumbing. 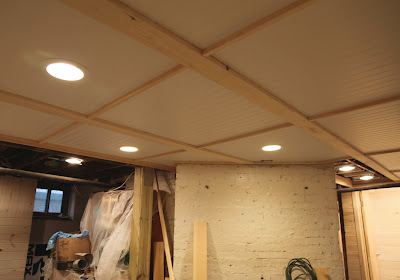 We're also trying to decide what to do about the floor. Should we clear everything out and just deal with it now? Or continue to use rugs on the cement floors. I'd sort of like to finish the floors as suggested by The Family Handyman website. 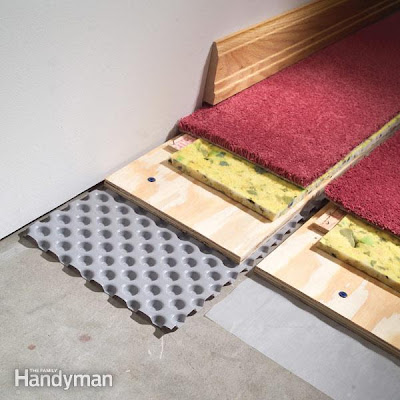 Of course, the more bits we add to this job, the faster it turns into a "real" project. We don't want to spend the next several weeks working in the basement, and we don't want to spend a bunch of money hiring help. But, we need to get out of storage, so we'd better decide fast. We need to be done and the house cleaned up again by summer.

Posted by Sharon Kwilter at 5:17 PM