We arrived in Portland on Thursday evening before dark and got to come and visit our new House!! While there were a couple of disappointments, it is exciting to have our own home again.

We've been busy this week. On Friday morning we went and bought a new mattress and box spring. We're not going to move the old set as it's 10 years old now and due for replacement. We bought a mattress set that was made in Newberg, Oregon! We paid more to get a set that was manufactured locally, but we're doing what we can to buy local-made goods.

Then we met with our basement repair guy, Blackmore Quality Construction, and reviewed our upcoming job with him. During our conversation we decided to expand the project to include the entire basement, rather than just one wall. While only one wall is "bad," the other three do sound like they're starting to separate from their parch coating. Since we expect we'll eventually be finishing the basement (thus, making it harder to do future repairs), we're just going to have all the mess and dust up front, before our stuff arrives. The basement repair begins on Tuesday. 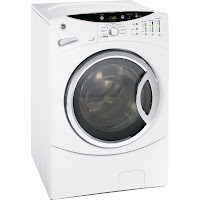 One of the disappointments we found on Thursday night was that our realtor did not write into the contract that the washer and dryer were included, so of course the sellers removed the existing set. While we did plan to eventually replace the washer and dryer that were there, we were looking forward to not having to deal with it right away. So, anyway, we went off to Sears to pick out new machines. Luckily, I brought my box of Consumer Reports on this trip to help us pick. We're just going to buy the "CR Best Buy" front loading washer with the matching dryer and call it good. We've got them all picked out and we're planning to go order them tomorrow. We're also going to buy a 19.7 cu. ft. freezer. 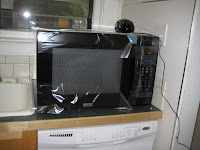 While we were at Sears, we bought a Kenmore Elite convection microwave and took it home with us. Once we took it out of the box, we discovered it wouldn't fit on the counter under the cabinets. Oops. So, we temporarily have it next to the sink. We'll soon be bringing a small table that will fit in the finished porch and will hold the microwave. The reason we're not bringing the microwave back to trade it for a smaller one is because this is the microwave we're planning to install once we remodel the kitchen (and also the reason we didn't buy it in white).

We've been unsuccessfully hunting around town at antique stores and craigslist trying to find a bedroom set. We're hoping to find some furniture we can use temporarily until our current set arrives, then we may either sell it or move it into the basement for a second bedroom for summer use. I did buy lights for our bedroom end tables from Lamps Plus. I found these pretty lights at their website on sale and got two for our master bedroom. The lights we are currently using got damaged in the last move and I'm not going to move them again. 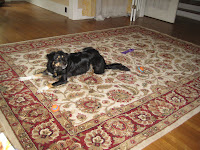 This morning we bought a rug at an antique store that was going out of business! We had dropped in there planning to buy a modern, but solid-wood, dining room set we had seen on Friday, but it had already sold! Oh well, we snoozed, we losed! =) Of course, Shasta has to try out the rug and make sure it works!

I have changed my plan for this next week. I was originally planning to stay here in Oregon until Jun 11 (and Jeff was going to fly back on Wednesday) and we were going to have the POD delivered and unloaded on Jun 3. Due to the bigger basement repair job, we've decided to change the plan. We are now going to both drive back together to California on Wednesday, June 2. Then I'll come back alone in a couple of weeks to get the POD delivered. That will give me time to sew window hangings in my still-set-up sewing room in California and the basement repair guys won't have to work around a big pile of stuff in the middle of the basement. Also, our boxes and household goods will get less dust and dirt on them.

Ultimately, our final move date, when we're finally moved out of Redwood City and here in Oregon full-time, is going to shift out about two weeks. Rather than being here to stay in the middle of July it will now probably be the end of July.
Posted by Sharon Kwilter at 7:21 PM