Sharon continues to seek productivity in front of the TV so she has managed to make several more ornaments.

This first one was made from wool scraps using the ornament pattern provided here: How To: Vintage Felt Baubles. Sharon skipped the ric rac step because she doesn't like the stuff! 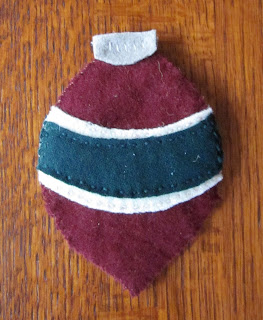 This next batch of ornaments was made from folded fabric and was quite fun to make. There are great directions at a couple of different blogs. The square shape ornaments are actually folded from circles and the tutorial is found here: Triangle Tree Tutorial.

The triangle-shaped ornaments were made from hexagons and the tutorial is found here:
Fabric Ornament Number Two.

The funky hexagon-shaped ornament (far left) was actually a mistake, but Sharon liked it well enough to go ahead and finish it with a button. It was made from a triangle, but the original triangle wasn't large enough to fold for the second step. The tutorial is found here:  Fabric Ornament Number One. She'll have to give this one another try with a larger triangle. 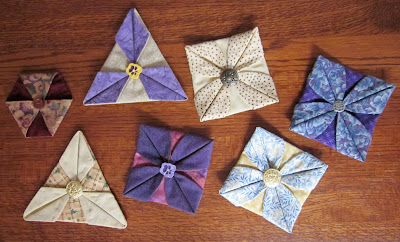 Then Sharon tried some new ornaments. The ornament on the far right was a total PITA to make, so she probably won't be making any more. The original pattern said to glue all the fabric intersections, but Sharon didn't think the glue would hold well, so she decided to sew them. The stack of fabric circles was bulky and hard to work with, but the finished ornament does look sort of neat. The instructions to make it are found here: How to: Fabric Ornament.

The other two ornaments are often called "quilted ball" ornaments. These were made from 42 - 2½ inch squares folded and pinned to a 3-inch styrofoam ball. These are Sharon's favorites and there will definitely more of these. (At least 6 total, because that's how many styrofoam balls she bought.)

There are two excellent tutorials on how to make the quilted ball ornaments. Sharon actually used bits of each tutorial to make her versions. The second ball, the purple one, turned out much better so now she's planning to take apart her first ball on the left and rebuild it so the pins don't show as much. These are fun to make!

There is another variation here, where you end up with more of a pinecone look ornament. Sharon's hoping to try that one too. She's definitely going to have to buy more styrofoam balls!

Fabric Styrofoam Ball Pattern
Posted by Sharon Kwilter at 10:33 AM