OK, Sharon is still pretty disappointed by the city's permitting rules. They seem to favor contractors and folks who don't care about the rules, but she is still considering our options for how we can proceed with our garage project.

Sharon's first idea is to rotate the roof 90° so the gable faces east-west. Like this. 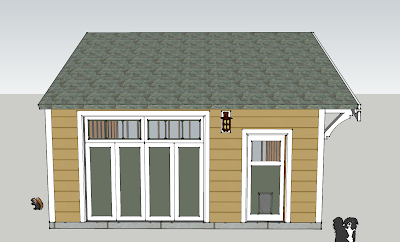 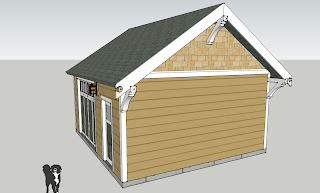 It isn't nearly as striking as our earlier plan and looks funny in the SketchUp picture because the roof is off center, but it seems the best way to deal with the city's rule that we can't extend out the west eave. Though it will probably bug Sharon every time she sees it for quite a while, it is actually quite difficult to get a good front view of the garage because it is partially blocked by the the house and plants.

Our other option is to go back to a DIY remodel plan. It will be slower, but will cost much less money.

Most of the leakage problem with the garage right now is it has no gutters and has wide gaps in the siding. And the water just flows down the driveway into the garage at the bottom of the hill. So, if we deal with those problems, we may be able to dry it out inside. (Here it is before we bought the house and pulled the fence.) 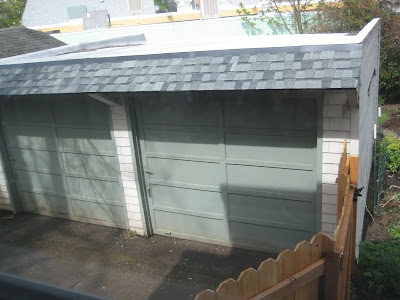 So, we're thinking about simply re-siding it (correctly—with plywood sheathing and house wrap), re-roofing it and adding a gutter, all of which don't require a permit. And we would try and deal with the drainage problem by putting in some sort of french drain across the front of the garage. And we won't have to pay for all the expensive permitting and inspections. Though we won't get that great storage space in the higher ceiling and gable.

If we do go with this re-side plan, Sharon would also like to pull off the weird roof flap thing and replace it with a nice white-stained trellis supported by matching scaled-down brackets. And we may also go ahead and replace the doors with carriage-style doors too, but we'll have to go shopping again. (Sigh.)
So many options, none of them great...

Posted by Sharon Kwilter at 9:40 PM