We Made Roller Shades!

This project was quite a trial for us! It seemed like everything that could go wrong--did! But, at last, they are done enough to use now. (We still have to add a small brass pull on the bottom and we have to find a secure way to attach the linen to the rod, but they're up and operational.)
We're not going to give a tutorial for how to make roller shades because there are already other excellent websites that do it.
Sewing 101: Roller Blinds

1959 instructions to make your own fabric roller shades

We will, however, include information about what worked and what didn't.

We started this project nearly a month ago, before we found out about the kitchen tour, but it got put aside in favor of the leaded glass project. We just now got back to it. These were the "temporary" curtains Sharon made for the parlor last fall. 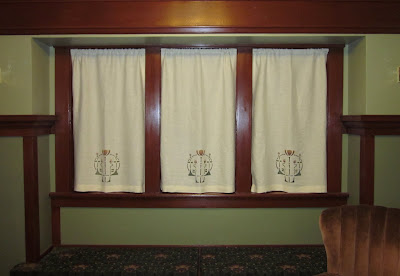 About a month ago, Sharon purchased roller shade rods and decided to "remodel" the curtains into shades. She washed them and ripped out all the seams then went ahead and cut them down. She finished the edge with a rolled edge seam done on her serger. 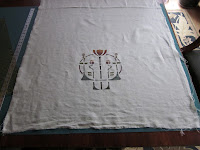 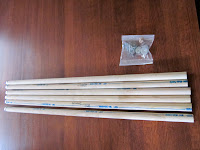 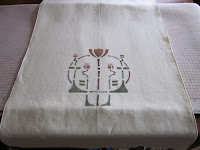 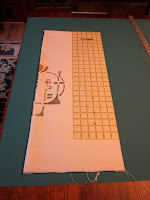 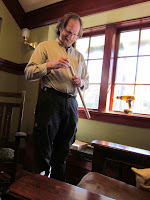 Then Jeff had quite a time hanging the rods. It seemed like it would be easy, but measuring for them is a bit tricky because of the brackets and end caps.  And we didn't have good cutting technology. Now we have a miter box, which helped immensely. 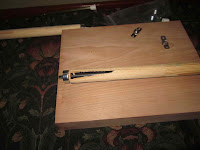 The first rod he cut was too short for these windows (though we can still use it on another smaller window). Then on the second rod, when he was attaching the end cap, he hit it a bit too hard with the hammer and it broke! Luckily, we had bought three extra rods for some other more optional windows. 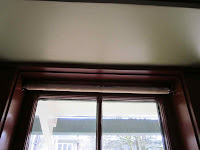 Finally, success!!
Today, when Sharon tried to attach the curtains they were a bit too wide! You can't make the panels wider than the rod because then they can get hung up on the brackets, especially if your fabric doesn't roll up perfectly straight. So she had to cut all three linen panels more narrow. Ugh.

This time she did it correctly; she pulled threads in order to "cut" the linen panels with a straight edge. In theory, this will also help them hang straight. Unfortunately, even though she had carefully cut them earlier with a straight edge and roller cutter, her original cut was still pretty crooked on the fabric. So when she straightened out the edges, it took off rather more fabric than she wanted. Now the panels are a bit too narrow!!

Also, these tutorials recommend stapling the fabric to the rod, but our rods came with a warning not to use staples longer than 1/16th of an inch. We don't have any that short and didn't see any at the hardware store. So, we are planning to just go ahead and attach the curtains with hot glue. But Sharon couldn't find her hot glue gun; it is probably still in storage. Masking tape did the trick for now.

Finally, another problem Sharon found with first making curtains and then remodeling them into roller shades is the placement of the stencil. Even though it was fairly close to the bottom edge on the curtains, they had a much larger bottom hem than the small casing on the roller shades. So, when she converted these panels to roller shades, the stencil was placed too far above the bottom edge. And the fabric panel was not sufficiently long enough to just cut it down so the stencil was closer to the bottom. Bummer.
This is one of those projects that may get redone at some point. But we're pleased to have successfully made these ourselves because now we have the skills to make them for other windows.
Posted by Sharon Kwilter at 7:04 PM