I was about to title this post canning peaches, but it has never made sense to me why it is called canning when we are using jars! Maybe we should call it jarring peaches?

Jeff and I went off on an unscheduled adventure with friends yesterday to Sauvie Island. Sauvie Island is where Portlanders go when they want to buy locally-grown fresh produce in bulk quantities. We came home with 40 pounds of peaches, 20 pounds of heirloom tomatoes, 25 pounds of red beets and a few other vegetables in smaller quantities. Today, Jeff decided he wanted to start off the day by defrosting the freezer before we made a bunch of new containers to go into it. In the process, he rediscovered a bunch of food he wants to use right away. Let's just say I'm going to be happy about having pie and baked ham for the next several weeks. :D

We processed two batches of jars of sliced peaches, which was more than one box of fruit. I don't normally talk about how to can. With so many excellent websites out there, I don't see the point of adding my meager skills to the pack. But I will point out a website I frequently visit when I do set about doing some preserving, called PickYourOwn.org. It's a great resource for general recipes and photos about how to preserve food. I've been visiting the website for years, as I mostly learned these skills after I was an adult and my family lived too far away to teach me. 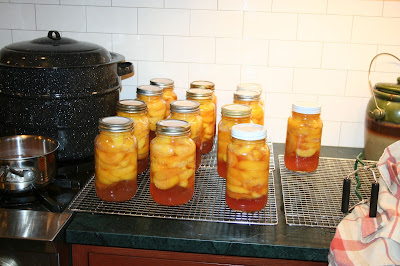 The other box, we've sliced and Jeff is making Peach Salsa again. We're big fans of Trader Joe's Spicy, Smoky Peach Salsa and we're trying to come up with a recipe we can make ourselves. Jeff found a recipe a couple years ago that was pretty close, but it was just a little too hot, so we're going to give it a try this year with a little less HOT. This year he is trying this recipe, mostly. (He never follows recipes exactly.) 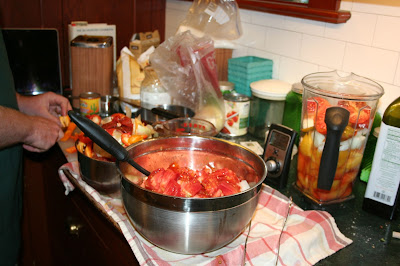 Update: We tried the salsa with our dinner tonight and it's really good. I think we found our recipe. :D Jeff posted his version of the recipe at his food blog here. 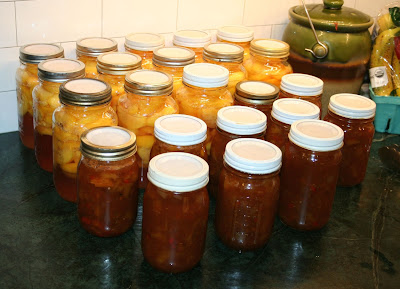 We're going to do another batch of the salsa. It's really good and it will be nice to have it through the winter.

Posted by Sharon Kwilter at 6:49 PM