We've been very lucky the last couple of days and I was able to work on varnishing the bathroom ceiling T&G outdoors. I originally expected to have to work in the living room, but this was way better. 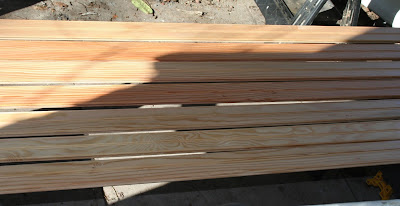 A couple days ago, the forecast was for FOUR sunny days and I was excited to have a bunch of time to work outside, but now our weather forecast has changed and the rain is coming back. Oh well, two days of sun is better than none. I knew the rain would be back, I just hoped it would wait a little longer so I could also do some staining.

Barrett came out today, a couple hours late, and grouted the bathroom floor. Though, he said he'd be back because there are still a few more tiles he wants to dig out and replace. He said grouting shows low areas or other problems, so he grouts first. 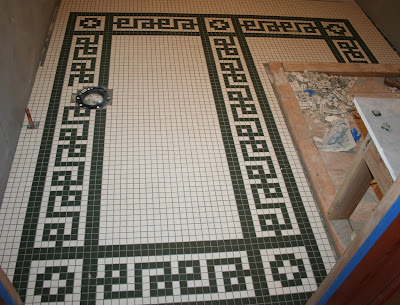 Once I painted the bathroom with glossy paint, I could see that the guy I hired to do the sheetrock taping in the bathroom did a lousy job. Sigh, it's not really a surprise based on his whining while he was here. So I decided to see if John MacNab could come out and fix it for us, as well as patching the other two holes in the other rooms. I wish I had just called him first, as his price was more reasonable than I was expecting. Luckily, he thinks he can squeeze in our job on Wednesday and Thursday of this week.

Then, on Friday, the bathroom cabinet will be installed. I'm really looking forward to that.

Posted by Sharon @ Laurelhurst Craftsman at 2:18 AM