I 💜 Our Public Library

I moan about the City of Portland quite a lot. The city has many problems, the primary one being way too many homeless people. There are too frequent thefts of anything we leave outside. A few weeks ago one of them stole the cushion off the wicker loveseat on our front porch. I guess (s)he decided it would be more comfortable to sleep on a cushion than on the ground. We had a cement elephant statue on our front porch that used to belong to my grandmother, that was stolen too.

But despite the problems, I will happily admit they have a stellar library system. My reading list right now: 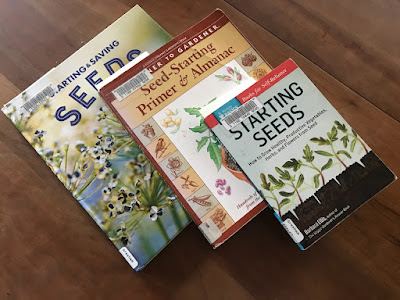 My attempt to start seeds has been less than successful. I haven't had a problem getting the seeds to sprout, my problem is getting them to grow beyond that point. I am clearly missing something. So I hit the library website and ordered some books. I was able to go pick them up yesterday.

Pre-internet, I was a voracious reader but since wireless computers and streaming TV, I just never got around to reading anything, despite owning thousands of books.

Last fall, Jeff and I decided to try an experiment. We turned off all the streaming TV channels; no more Hulu, no more Netflix. If we needed a movie fix, we could watch one of our DVDs. It was the first time in a few years we were able to focus on reading and writing without feeling the pull of TV.  And even though we turned on Disney+ in November and immediately watched through the Star Wars and Avengers saga, we have already turned it off. It's been satisfying for us to focus on something else.

Combining our extensive task lists in Habitica and the ability to download audiobooks directly on to our iPhones, Jeff and I have been listening to a TON of audiobooks. We listen to them when we're cleaning, exercising, gardening, sewing, whenever we don't have something too complicated to focus on.

Since the beginning of January, I have finished reading or listening to 49 books! 49 books. I am really enjoying this amazing service the library provides and it has cost us nothing additional beyond what we're already paying in taxes. I would encourage all of you to explore your library's audiobook offerings.

Posted by Sharon Kwilter at 9:00 AM