Last night was not good. After I brought up the subject of extending our days here in Redwood City, in order to do a more careful job packing, Jeff was upset about a change to his plan of leaving on Wednesday. Then, I had total meltdown and started throwing mixed stuff into boxes and labeling them misc. Unpacking these boxes at the other end will not be good. =)

Today is better, but the boxes are still going to tend toward ugly on the other end. We have a lot of hard-to-sort stuff left at this point.

I posted the last of the furniture on craigslist at liquidation prices. The little curio cabinet went this morning. Hopefully some more of the furniture will go by Tuesday. If not, we'll throw it into the POD and deal with it on the other end. 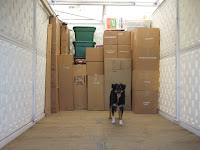 Here's the new POD as of this morning. We actually got a lot of stuff packed and out of the garage yesterday. It's unlikely we're going to be able to fill this one. I guess I ordered too many PODS; we should have gotten a UHaul truck at the end instead. Oh well. 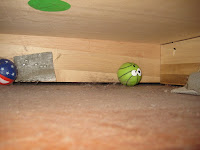 We keep finding dog toys under furniture. Jeff took this picture this morning because it kind of reminded me of a Pixar short where all the toys were looking out from under the couch.
Posted by Sharon Kwilter at 11:43 AM