Once upon a time, I posted a bunch of historic Oregonian articles on a Laurelhurst wiki, but it looks like that resource has been taken down. Sadly, I didn't grab a backup from it. (I'm not sure I could have, but I never really tried either.) Anyway, I do have some files still on my computer backup drives and I would like to do what I can to preserve that information in a searchable format. So, I will do my best over the next few months to republish interesting articles I found during my research of Laurelhurst several years ago. I'll pick it up near the beginning and try to publish the articles mostly in order. 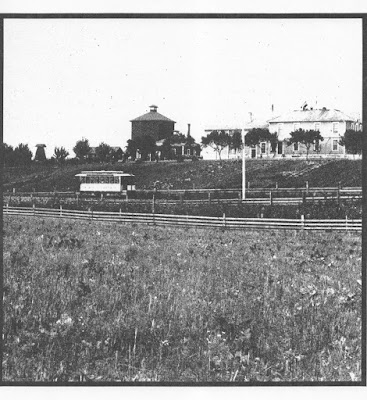 Property Includes 462 Acres on East Side WILL BE OPENED FOR HOMES
Charles K. Henry Heads Syndicate in Big Deal
2880 LOTS CALLED FOR
Land Laid Out by Boston Firm in Ideal Building Locations--Will Probably Be Put on Market in Single Lots About July 1

Hazel Fern Farm, the magnificent tract of land consisting of 463 acres in the heart of the East Side, owned for many years by the Ladd Estate, has been acquired by Charles K. Henry and associates at a consideration of approximately $2,000,000.

Mr. Henry now has under consideration the formation of a syndicate to handle the vast property. With him in the initiative stage of the proceedings are associated Frank F. Mead and Paul C. Murphy, of Seattle, and H.R. Burke of Portland.

Hazel Fern Farm lies between the Barr Road on the north and the Base Line Road on the South and East 33rd and East 44th Streets east and west. Olmsted Brothers, of Boston, some months ago laid out the big tract in a parking system, preserving the higher portions for buildings with streets following the contour of the lands. This plan calls for 2880 lots and it is the intention of the new owners to place these on the market. Under the Olmsted plan the tract will be one of the most attractive in the country, lending itself to ornamental landscape gardening in its highest phases. As at present outlined, lots will sell from $800 upward, and building restrictions will range from $2000 to $5000 according to location.

Mr. Mead and Mr. Murphy, the two Seattle men interested with Mr. Henry are handling a suburban tract at Seattle known as Laurelhurst, which is pronounced to be one of the show places in the Sound city. They own lands near the Exposition grounds on Lake Washington and report good sales to people who intend to build fine residences.

Sandy Road cuts through the Ladd farm diagonally in the northwest corner, and an extension of East Glisan Street passes through the middle. There has been some movement on the East Side to have East Glisan made a wide street, either 80 or 100 feet, and the new owners said yesterday that if the
projectors of this wide street would assure them that the work would be taken up in the contiguous territory they believed no difficulty would be found in meeting such a proposition halfway.

No city on the Coast has such an extensive tract of vacant property located within its corporate limits as this and it is certain that no ground is naturally better adapted for laying out in sightly building lots. The Ladd homestead ranch-house stands near the middle of the farm at an elevation of over 200 feet, and sloping off in all directions the land is rolling and practically all cleared.
Off in the southeastern portion of the farm a grove of forest trees surrounds a small lake, making an ideal parksite. When the Park Commission voted a bond issue for new breathing places, this tract of about 25 acres was selected as one of the sites to be acquired by the city. The new owners announced yesterday that if the Park Board desired to get this piece for park purposes it would be necessary to move quickly, for they intend to get to work at once after everything is in readiness and push the sale of lots to the limit.

One part of the farm just south of the ranch-house lies on a slope that is naturally terraced, and The Olmsted Plan provides for streets and roadways that are to cut up the tract into irregularly-shaped lots that will provide sites for residences unsurpassed in and about Portland.

Carlines are operated on three sides of the tract and the O.R.&N. cuts across the northeastern corner of the farm. The city is building up rapidly all around the farm and when lots are offered in this newest addition it is certain to be built upon at a rate that will exceed any previous record made in Portland. Yesterday afternoon, when news of the purchase was noised around, Mr. Henry received several telephone calls from intending buyers asking for reservations. Probably nothing will be done in the way of sales until after July 1, as there is considerable preliminary work to be accomplished before the tract is ready for the market.

William S. Ladd acquired Hazel Fern Farm something like 35 years ago and after building the farmhouse and barns, engaged in the raising of fine imported cattle, his herds being prize animals on many occasions. He took much delight in his farm and his was a familiar figure for years on his way to and from the wide acres where his fancy Jerseys roamed.

Edward Cookingham said yesterday the Ladd Estate Company has realized for a long time that it owned one of the most valuable tracts in this part of the country in Hazel Fern Farm, but the management believes now is a most auspicious time to sell, and has decided to accept Mr. Henry's offer to finance the big undertaking. Mr. Henry and his associates took over the property, but it is believed that other Portland capitalists will soon join the syndicate.

This is the biggest realty deal that has been negotiated in years for vacant lands in Portland, and its effect is certain to put a strong stimulus into the local market. There is part of the tract that lies north of Sandy Road that is similarly located to the plats of Hancock Street Addition and other subdivisions in that vicinity. It is reasonable to assume that this portion of the farm will be acquired by persons already heavily interested in that part of the city to round out their holdings.

It is the intention of the syndicate to sell some of the odds and ends in more than one to three lots, but after July 1 it is more than likely sales will be made to people who will build residences on the picturesque sites.

Little short of a revelation awaits visitors unfamiliar with perspective at Hazel Fern. In one direction the undulating foreground sweeps into districts of the East Side that are closely built up; in another city along the river looms up in majestic proportions, while in still another the new city shows in its masses of new buildings the homes of the people. From the high ground the hills back of the West Side city stand out in contrast to the distant skirt of snow-fringed mountains in the Eastern horizon.
Considerable difference of opinion was expressed last night as to the effect of this tract coming on the market with reference to the surrounding tracts that have been platted for some time. Well informed realty men say, however, that instead of putting a crimp in other plats, this deal will stimulate buying all the way through. There is a steady and insistent demand for building sites for dwellings and this big addition doubtless will be absorbed just as the others were.

Obtained by Foreclosure of Mortgage Given by Terence Quinn
The Hazel Fern Farm was acquired in part by W.S. Ladd by the foreclosure of 80 acres on which a mortgage of $1500 had been given. It was originally known as the Quinn donation land claim and was taken up by Terrence and John Quinn, two brothers who came from Ireland about 1852.
The property was taken up by Terence Quinn and his wife, Mary, who divided the tract between them. Before the patent to the land had been taken out, Mary Quinn died, leaving one daughter, also known as Mary, to whom she bequeathed approximately half, or about 80 acres of the tract. The other half was left to her husband, Terrence. When little Mary Quinn was 10 years old, she was sent to a convent school at New York and remained there till she was 30 years of age.

In the meantime, her property had been mortgaged for $1500 by her father to William S. Ladd, who contended he advanced on it in good faith. According to an old-time resident Ladd believed the deeds to the property to be all right and Terrence Quinn was then permitted to mortgage the land. When Terrence got into difficulties some two years after the mortgage was granted, W.S. Ladd foreclosed, the date of the foreclosure being about 1870.

Terence Quinn died and it was a long time before Mary Quinn obtained any inkling to the fact that she had any title whatever to any Oregon property. About 1894 she learned of the 80 acres bequeathed to her by her mother, came to Oregon and after taking advice, commenced suit against Mr. Ladd for the return of the property. The mortgage foreclosed included not only the property of Mary Quinn, but that possessed by her father.

The case of Quinn versus Ladd went through the court until the Supreme Court of the United States was reached. About this time a decision was handed down by the Supreme Court which appeared to cover the facts in the case. On the advice of her attorneys Mary Quinn then withdrew all further proceedings.

It is said a decision would have been given to William S. Ladd on the ground that he advanced the money in good faith and on the documents deposited with the mortgagor, although several other technical questions were involved.

The case was one that attracted country-wide publicity and quite apart from the legal aspect of the case, Mary Quinn is said to have been the subject of much commiseration. 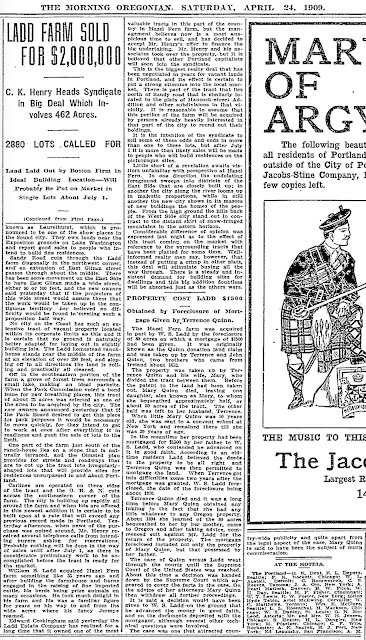 Posted by Sharon Kwilter at 5:14 AM