Oregonian 2 Oct 1910
Last Section Put on Market
Southeast Quarter of Laurelhurst Is Offered for Sale
What is called the southeast quarter of Laurelhurst was placed on the market last week. In reality it is considerably less than a quarter of the addition, but it contains about 450 lots, and some of them are said to be in as good locations as any in the tract. This is the last part of the addition to be offered for sale.

About a third of the area of this section lies along Ladd Park, on its East 39th Street side. The improvement work in this part has been taken up last of all, but it is said to be well along now, and on any lot in it water can be drawn. The grading for the streets is finished and the underground work is almost done. All the improvement work in the addition is announced in such condition that the contractors will have it completed by early Spring. Building is becoming more and more active and houses are rising in all parts of the tract. 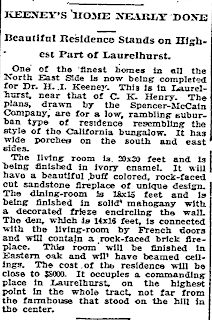 Oregonian 2 Oct 1910
Keeney's Home Nearly Done
One of the finest homes in all the North East Side is now being completed for Dr. H. I. Keeney. This is in Laurelhurst, near that of C. K. Henry. The plans, drawn by the Spencer-McCain Company, are for a low, rambling suburban type of residence resembling the style of the California bungalow. It has wide porches on the south and east sides.

The living room is 20x20 feet and is being finished in ivory enamel. It will have a beautiful buff colored, rock-faced cut sandstone fireplace of unique design. The dining-room is 18x15 feet and is being finished in solid mahogany with a decorated frieze encircling the wall. The den, which is 14x16 feet, is connected with the living-room by French doors and will contain a rock-faced brick fireplace. This room will be finished in Eastern oak and will have beamed ceilings. The cost of the residence will be close to $5000. It occupies a commanding place in Laurelhurst, on the highest point in the whole tract, not far from the farmhouse that stood on the hill in the center. 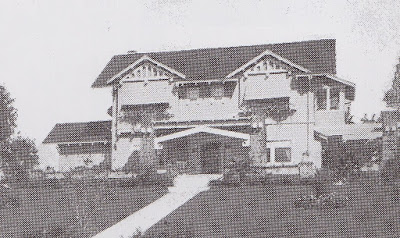