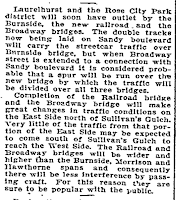 (Large portions of this article were omitted because they did not directly relate to Laurelhurst.)
Laurelhurst and the Rose City Park district will soon have outlet by the Burnside, the new railroad and the Broadway bridges. The double tracks now being laid on Sandy Boulevard will carry the streetcar traffic over Burnside bridge, but when Broadway Street is extended to a connection with Sandy Boulevard it is considered probable that a spur will be run over the new bridge by which the traffic will be divided over all three bridges. 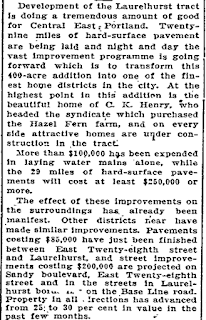 Development of the Laurelhurst track is doing a tremendous amount of good for Central East Portland. 29 miles of hard-surface pavement are being laid and night and day the vast improvement programme is going forward which is to transform this 400-acre addition into one of the finest home districts in the city. At the highest point in this addition is the beautiful home of C.K. Henry, who headed the syndicate which purchased the Hazel Fern Farm, and on every side attractive homes are under construction in the track.

The effects of these improvements on the surroundings has already been manifest. Other districts near have made similar improvements. Pavements costing $85,000 have just been finished between East 28th Street and Laurelhurst, and street improvements costing $200,000 are project on Sandy Boulevard, East 28th Street and in the streets in Laurelhurst (illegible) ?bordering on the BaseLine Road. Property in all directions has advanced from 25 to 30% in value in the past few months.

Oregonian 11 Sep 1910
Quiet Period Not Felt
LAURELHURST HAS BIG VACATION BUSINESS
Great Improvement Work on in Addition—August Sales Are Over $115,000

Reaction after the vacation slump is now being felt in the large addition of Laurelhurst. Sales of $140,092 in June, $94,047 in July and $115,230 in August mark a "quiet" period of sales are progressing rapidly and already there has been sold in this tract more lots than were sold in the entire month of August. A total of $2,000,000 in sales has already been arrived at in this tract.
Laurelhurst, when platted, was divided into four sections, designated as the first, second, third and fourth plats. The first, or [[NW Quad|northwest plat], has already been sold. The second plat is already about two-thirds sold, the third plat less than one-half sold and the fourth plat about one-half sold. Now the Fall campaign is to be opened at once and preparations are being made to handle the great number of inquiries for property in the addition.

Laurelhurst improvements are the most extensive ever undertaken in Portland. With everything done in first-class style on a gigantic scale the handling of this tract is an eye-opener to the entire state. All Summer this work has been going ahead steadily. There have been working over 600 men, steadily, 200 teams, two automatic grading machines and two huge steam shovels. An ideas of the great work may be gathered from the fact that hard-surface streets, 26 miles in all, are being laid. There are being put in 53 miles of sidewalks, curbing, shade trees, etc. In the northwest quarter these improvements, including gas, water and sewer mains, are about completed, the hard-surface men just finishing their work. In the southwest quarter the work is now ready for the hard-surface workers, the remainder of the improvements being completed. The grading is finished on the east half and the mains are now being dug.

There are already between 30 and 40 houses under construction. Eight or ten of these have been completed. The cost of the Laurelhurst homes is between $2500 and $25,000. As an example of what the home builders are doing it may be cited that in block 1 of the addition, Dr. Homer I. Keeney, Charles K. Henry, O.W. Taylor and Charles V. Cooper are building four magnificent homes with a community garage, and the property all laid out by Hawkes, the landscape artist, at an aggregate cost of $75,000. This work is already underway.

The boulevards in the addition wind around following the gentle slope of the ground. They are from 60 to 80 feet wide. The improvement of these streets and boulevards is an immense undertaking and there have been expended in the preparation of the land already over $690,000.

In the Big Laurelhurst addition the southeast quarter of the tract will soon be opened. Paul C. Murphy, president of the Laurelhurst Company, is arranging the work so as to be able to place this desirable property on the market not later than October 1. The improvement work has been rushed all Summer all over the addition and now this last division of the property is about ready for marketing. This part of the tract contains 450 of the 2200 lots in the addition.

Through the Summer there has been a large force of men at work on the improvements of the tract. The work of hard surfacing all the streets, laying cement sidewalks, sewer, gas and water mains, grading and putting in shade trees has been going ahead until the appearance of the old property former known as the Ladd Hazel Fern Farm has now been entirely changed. Houses dot the tract on all sides and new basements are being put in all over. Since the water has been turned on in a great part of the addition the work of building is going ahead rapidly. Eight new houses were started last week.

Sales have been going on steadily, even in advance of the improvement work. The first quarter, which was first marketed, has been almost entirely improved and this is all sold. This is the section between East Burnside and East Glisan Streets and from East 28th Street to the Laurelhurst line. The streets in this section have been all hard surfaced this last Summer. This work will now continue until by next Spring every foot of the 26 miles of streets in the big addition will be hard surfaced.

Oregonian 25 Sep 1910
Homes Total $114,000
LAURELHURST HOUSES AVERAGE MORE THAN $5000
Street Work and Grading Rushed and Water Can Be Turned on Any Lot in Tract
More than $114,000 worth of homes have already been completed in Laurelhurst. This is an average of more than $5000 for each house. It was less than a year ago that the deed was filed to Ladd's Hazel Fern Farm, and the same activity in home- building has been manifest here as in other sections of the city.

The improvements of the addition have been going on as rapidly as contractors could be pushed. Nearly all the grading and underground work has been completed and water can be turned on any lot in the tract. This week is to see paving begun on East 39th Street, from East Glisan to the Sandy Road. It is also hoped that the temporary tracks on which the Montavilla line has been running may be removed, for nearly all the work of laying the brick between the tracks on East Glisan Street has been completed. When the temporary track is taken out asphalt pavement will be laid.

With the completion, inside the next week, of seven or eight ungraded blocks, Laurelhurst street grading will total 26 miles, all of which, before the big work concludes, will be paved asphalt and underneath which lie more than 100 miles of sewer, water and gas pipes. At present the work includes the employment of about 200 laborers and the use of more than that number of horses. The steam shovels and the automatic graders will be out of commission in a few days because their work practically has been finished.
Posted by Sharon Kwilter at 8:00 AM