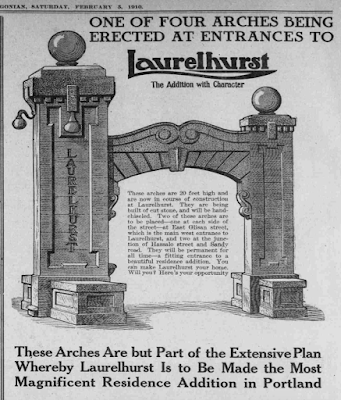 The Oregonian, 19 Dec 1909
December is Busy Month
Experience In Laurelhurst Shows Winter Can Be Made Profitable

There has been great activity in Laurelhurst the past week. A larger number of sales than usual has been made and plans are being prepared for three new homes--one to be built by the company, and two by Messrs. Steine and Belcher. A large force of men and 50 teams have been employed since the snow went off a week ago in making permanent improvements. In discussing the real estate market in general. Frank F. Mead, the manager of the company, said yesterday:


"During November our sales in Laurelhurst exceeded the combined sales of September and October, in spite of the fact that most of the weather was unfavorable. The rainy weather does not seem to deter people to any great extent, but during the week, when the ground was covered with snow, of course it was impossible to show the property to anyone, so business was at a standstill while the snow remained.

"Activity in our property is due in a great measure to the fact that street improvements are well under way. We have 50 teams--many of them three and four-horse teams-at work everyday when the weather will permit, and if we can have 30 days more like the past week, we shall complete the grading and get a good start on the walks, pavements and other improvements.

"There seems to be an impression in Portland that November, December and January are not good real estate months. If that has been the experience of real estate dealers generally, it is due, in my opinion, largely to the fact that they have such an opinion and having it act accordingly. I have noticed that many of them seem to have suspended their efforts for the time being; that the real estate advertisements in the newspapers are falling off materially. In my judgment, this is a mistaken policy, because selling real estate is like sawing wood--if you quit sawing, your woodpile will cease to grow. Our experience convinces me that I am right, because we are making the effort to sell lots, and are selling them. We have sold several to buyers who expect to begin building as soon as the weather is favorable. I am very well satisfied with our progress at this time.”