BUILDING OPERATIONS START IN NEW ADDITION
Purchase of Lots So Great That Second Part of Section Will Soon Be on Market
One of the features of the week in real estate circles has been the large number of sales in Laurelhurst. The new addition, formerly the Ladd Hazel Fern Farm, was originally platted into four distinct sections and but one of these was placed on the market. Until a week ago less than half this property had been sold, but the heavy sale of the last week took almost all the lots in the original plat and soon a second division will be offered.

Building has become apparent with the return of the warmer weather. All over the fine residence addition ground is being broken for new homes and it is estimated that between 50 and 60 (portion missing) cause of the Spring weather.

The $10,000 home of C.V. Cooper is one that will soon be commenced. The plans for this structure call for an elaborate home with the first story in stone, the second story stucco with a red tiled roof and solid mahogany finish throughout. One of the homes now nearing completion is that of P.S. Easterday, which will be occupied by March 15. This is to cost about $5000. Francis Dubois is preparing plans for his home and will start at once the building of a $5000 home. It will be a concrete bungalow of seven rooms and will have hardwood finish in the interior.

Charles S. Russell is now planning a home to cost about $8000. He will start work in a few weeks. These homes are all of high grade. 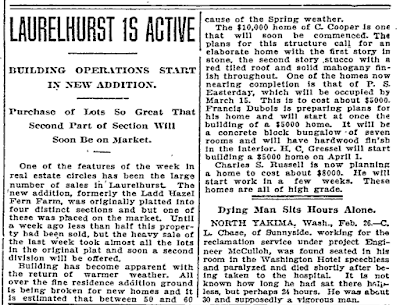 East side sales, both of business and residence properties, established a new record in February. ...In Laurelhurst, 265 lots were sold for a total of $519,000, and if the present rate of sales is maintained this tract will soon be sold out. Many of the lots are being sold to investors outside of Portland, 15 lots having been sold at Walla Walla.... 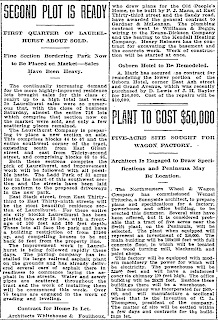 FIRST QUARTER OF LAURELHURST ABOUT SOLD
Fine Section Bordering Park Now to Be Placed on Market—Sales Have Been Heavy.

The continually increasing demand for the more highly-improved residence lots brought sales for this class of realty up to a high total last week. In Laurelhurst sales were so numerous that, with the close of business Saturday, almost the entire 718 lots which comprise that section now on the market were sold, and only a few scattering pieces remained.

The Laurelhurst Company is preparing to place a new section on sale. This comprises blocks 44 to 67 and the entire southwest corner of the tract, expanding south from NE Glisan Street and east from 32nd Street, and comprising blocks 68 to 95.

Both these sections comprise the pick of Laurelhurst, and improvement work will be followed with all possible haste. The Ladd Park of 31 acres lies in the heart of this southwest section and the streets have been laid to conform to the proposed driveways in the new park.

East Stark Street, from East 33rd to East 39th Streets will be the most beautiful residence section of Laurelhurst. For these entire six city blocks Laurelhurst has been platted into only 18 lots, with a frontage of 100 feet and 180 feet depth. These lots all face the park and have a building restriction of from $7500 up and compelling houses to be set back 50 feet from the property line.

The improvement work in Laurelhurst is being followed rapidly these days. The paving company has installed its large railroad asphalt plant on the grounds and has already delivered several cars of asphalt there in readiness to commence laying the asphalt in the streets. Water and sewer pipes are scattered throughout the tract and the work of installing them will be commenced this week. Over 75 teams are engaged in the work of grading and leveling.

Contract for Home is Let
Architects Whitehouse & Fouilhoux who drew plans for the Old People's Home, to be built
by P.J. Mann, at East 33rd Street and the Sandy Road, have awarded the general contract to Gardner & McLeanan. The plumbing contract went to Willamn & Beggs, wiring to the Evans-Dickson Company and the heating to the Kendall Heating Company. Henry Reimers has the contract for excavating the basement and the concrete work. Work of construction will be started at once.
Oregonian 27 March 1910 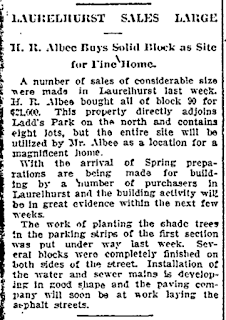 A number of sales of considerable size were made in Laurelhurst last week. H.R. Albee bought all of block 90 for $21,000. This property directly adjoins Ladd's Park on the north and contains eight lots, but the entire site will be utilized by Mr. Albee as a location for a magnificent home.

With the arrival of Spring, preparations are being made for building by a number of purchasers in Laurelhurst and the building activity will be in great evidence within the next few weeks.

The work of planting the shade trees in the parking strips of the first section was put underway last week. Several blocks were completely finished on both sides of the street. Installation of the water and sewer mains is developing in good shape and the paving company will soon be at work laying asphalt streets. 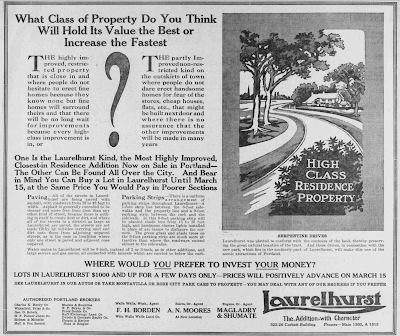