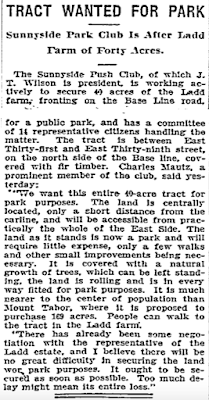 Sunnyside Park Club Is After Ladd Farm of Forty Acres

The Sunnyside Push club, of which J.T. Wilson is president, is working actively to secure 40 acres of the Ladd farm, fronting on the Base Line road, for a public park, and has a committee of 14 representative citizens handling the matter. The tract is between East 31st and East 39th Street, and the north side of Base line, covered with fir timber. Charles Mautz, a prominent member of the club, said yesterday:

We want the entire 40-acre tract for park purposes. The land is centrally located, only a short distance from the carline, and will be accessible from practically the whole of the East Side. The land as it stands is now a park and will require little expense, only a few walks and other small improvements being necessary. It is covered with a natural growth of trees, which can be left standing, the land is rolling and is in every way fitted for park purposes. It is much nearer to the center of population than Mount Tabor, where it is to purchase 169 acres. People can walk to the tract in the Ladd farm.

There has already been some negotiation with the representative of the Ladd estate, and I believe there will be no great difficulty in securing the land for park purposes. It ought to be secured as soon as possible. Too much delay might mean its entire loss.
Posted by Sharon Kwilter at 8:00 AM